Celebrating Lincoln's birth across the country

WASHINGTON (CNN) -- From Capitol Hill to Springfield, Illinois, President Obama and Congress paid tribute Thursday to Abraham Lincoln on the bicentennial of his birth. 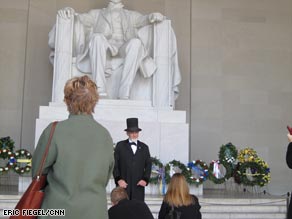 Visitors greet an Abraham Lincoln impersonator in Washington on Thursday.

"It is an honor to be here: a place where Lincoln served, was inaugurated, and where the nation he saved bid him a last farewell," Obama said at the Capitol on Thursday.

"At a moment when we are far less divided than in Lincoln's day but when we are once again debating the critical issues of our time -- and debating them sometimes fiercely -- let us remember that we are doing so as servants of the same flag, as representatives of the same people and as stakeholders in a common future. That is the most fitting tribute we can pay and the most lasting monument we can build to that most remarkable of men, Abraham Lincoln," Obama said.

Obama will also speak later Thursday at an event in Springfield.

Throughout the 2008 presidential campaign, Obama -- a Democrat who hails from the Land of Lincoln -- reminded audiences from coast to coast about the similarities between himself and the beloved political leader.

At his presidential acceptance speech in Chicago, Illinois, on November 4, Obama used Lincoln as a guide for his ideology.

"As Lincoln said to a nation far more divided than ours, 'We are not enemies but friends. ... Though passion may have strained, it must not break our bonds of affection,' " Obama said.

Watch a young student read one of Lincoln's speeches »

In Washington, a congressional tribute took place at the Capitol rotunda.

At the end, a wreath was placed at the Capitol.

The Abraham Lincoln Presidential Library and Museum in Springfield also opened its doors Thursday for a special celebration, featuring original documents including the Gettysburg Address.

Meanwhile, the Library of Congress marks the bicentennial Thursday by opening a special exhibit featuring Lincoln's handwritten speeches and artifacts, including the Bible used last month by Obama during his swearing-in.

"This exhibit, in a little more than 200 items, presents Lincoln, the man and the politician," said John Sellers, curator of the exhibit, which runs through May 9.

Lincoln successfully fought a proposal for legalized slavery as development spread to the Western United States, and he eventually brought an end to slavery throughout the country.

The librarian of Congress, James Billington, acknowledges that the materials are available on the Internet in "digitized" form, but he said "there is something about seeing the original because, after all, Lincoln was a man of words, of rare eloquences."

The exhibit at the Library of Congress -- on Capitol Hill next to the U.S. Supreme Court -- was in the works for Lincoln's bicentennial long before the presidential campaign in which voters elected Obama.

Billington said the exhibition is all the more profound as visitors explore the links between the anti-slavery Lincoln and the African-American Obama.

The poster includes a photograph of John Wilkes Booth, who was on the run after being accused of firing the fatal shots at Ford's Theatre in Washington, where Lincoln was attending a play.

Other, more lighthearted artifacts are also on display, including an 1860 letter from a girl urging presidential candidate Lincoln to grow a beard to help his prospects with voters.