Solar-power firm fired up about stimulus 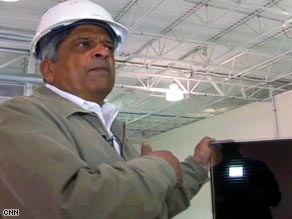 Obama touts that the stimulus bill will help create up to a half a million so-called "green" jobs in the field of alternative energy. Colorado has a growing green energy industry.

Executives of AVA Solar, based in Fort Collins, Colorado, are among green energy industry representatives invited to the bill signing.

AVA Solar has its plant in Longmont, about 30 minutes north of Denver. The plant, set to begin production in the spring, will construct solar panels for solar power plants.

Once production is up to speed, CEO Pascal Noronha says, the plant should create enough solar panels a year to power 40,000 U.S. homes.

Noronha says those two moves would help AVA Solar create 1,000 to 2,000 new jobs in its factory, plus added employment for its suppliers.

The company, founded in 2007, currently has 175 employees. Without the stimulus, Noronha said, AVA Solar is on track to create 420 new jobs by the end of this year.

AVA Solar currently operates on $175 million in U.S.-based private venture capital. In 2007 the company also received $3 million in seed money from the U.S. Department of Energy.

Noronha says Obama is on the right track in terms of the stimulus bill.

"What everybody needs is a little seed money because five years from now there's no question [that] solar has to replace the oil that we import," Noronha says. "What the government needs to do is provide the traction that is needed to get the first few projects on the ground."

"We need money from the federal government ... to facilitate production immediately," the CEO adds. "Otherwise, we will be sitting and waiting for projects in the U.S., and if we have to wait one year or two years -- when we're able to produce a solution for this country today -- that is a really good reason for the government to say, 'Here it is, let's go.' "

Noronha says his company's biggest customer base is in Germany, a country that is far ahead of the United States in embracing solar energy.

Obtaining U.S. customers is a priority, he explains.

"As a company we would very much like to have customers here in the U.S.," Noronha says. "The government needs to be able to facilitate these customers by making it possible for them to put large-scale power plants up."

Noronha is optimistic about the stimulus bill and the direction of the Obama administration.

"If you look at the vision of the president, you know he is looking out in the future and saying we've got to reduce our dependence on foreign oil," Noronha says.

"Well, to reduce our dependence on foreign oil, there is only renewable energy. And there are two forms that are promising -- one is wind and the other is solar. And solar, you've got the sun's resources all over the world."