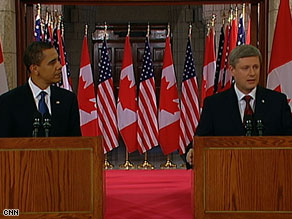 Obama and Harper discussed possible remedies for the global economic downturn, a new initiative to fight global warming and the ongoing struggle against Taliban and al Qaeda elements in Afghanistan, the leaders said during a joint news conference.

The struggling economy was at the top of the agenda, with emphasis on the controversy surrounding the "buy American" clause in the recently passed U.S. economic stimulus package.

Canadians worry that the provision marks a resurgence of protectionism. It requires the use of U.S.-produced iron, steel and other manufactured goods in public works projects that the $787 billion package funds.

"It was very important to make sure that any provisions [in the stimulus plan] ... were consonant to our [obligations] under the WTO and NAFTA," Obama said. That goal, he added, had been achieved.

"I want to grow trade, and not contract it," he said. "I don't think there's anything in the recovery package that's adverse to that goal."

As "one of the largest economies in the world, it's important for us to make sure that we are showing leadership in the belief that trade ultimately is beneficial to all countries," he added.

There are provisions in both the World Trade Organization pact and the North American Free Trade Agreement, Harper said, that allow governments to assert domestic preferences and purchasing policies.

"These things are allowed in some cases, but they are certainly not allowed without limit," he said. "We expect the United States to adhere to its international obligations."

The Canadian government says that more than 7 million American jobs directly depend on trade with Canada. iReport.com: Canadians' advice for Obama

The dialogue commits senior officials from both countries to collaborate on the development of clean energy, science and technologies.

It will "strengthen our joint research and development," Obama said. "It will advance carbon reduction technologies. And it will support the development of an electric grid that can help deliver the clean and renewable energy of the future to homes and businesses, both in Canada and the United States.

Global warming, he added, "is not just a U.S. or a Canadian issue. ... This is a worldwide issue that we're going to have to confront, [and] as two wealthy countries, it's important for us to show leadership on this issue."

Canada has had trouble establishing "an effective [environmental] regulatory regime alone," noted Harper, who said he is optimistic that the United States will now "provide leadership to the world on the climate change issue."

Both leaders brushed aside concerns over differences between their nations in the struggle in Afghanistan and the larger war on terror.

Watch more on the U.S. efforts in Afghanistan »

Obama said he did not press Harper for any additional Canadian troop commitments to the Afghan war. He refused to answer a question about whether he would send more U.S. troops beyond the 17,000 committed earlier this week.

Gen. David McKiernan, the U.S. commander in Afghanistan, has requested an additional 30,000 troops to help reverse what have been, according to most analysts, recent gains for al Qaeda and Taliban elements.

Canada is focused primarily on training the Afghan army, Harper said, "so the Afghans themselves can become responsible for their day-to-day security."

Ultimately, he said, the job of establishing peace and security in Afghanistan can only be achieved by the Afghans themselves.

Harper said Canada takes "security concerns as seriously as our American friends" and expressed confidence that the relationship between the two countries will remain strong regardless of any current differences.

Watch Obama talk about the importance of Canada-U.S. ties »

The two leaders addressed the media after a working lunch in the Canadian Parliament's historic Senate dining room. The ornately furnished chamber has been an elaborate temporary office for numerous heads of state, including most notably King George VI in 1939 and Queen Elizabeth II in 1967 and 1981.