States to get first stimulus boost this week 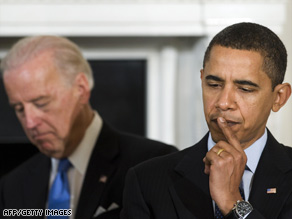 President Obama and Vice President Biden meet with governors at the White House on Monday.

The money, Obama noted at a White House meeting with governors, will be distributed starting Wednesday in the form of more than $15 billion in new Medicaid assistance.

"That means that by the time most of you get home, money will be waiting to help 20 million vulnerable Americans in your states keep their health care coverage," Obama told the governors.

But the money, Obama warned, is "not a blank check" to state governments. The money is "intended to go directly toward helping struggling Americans keep their health care coverage. ... We're going to work with you closely to make sure that this money is spent the way it's supposed to."

The president said he would not hesitate "to call out" state governments that spend the money in a wasteful or inappropriate manner.

In that vein, Obama announced the appointment of former Interior Department Inspector General Earl Devaney to head a new Recovery Act Transparency and Accountability Board, to ensure the $787 billion stimulus package is spent in an open, efficient manner.

"Earl has doggedly pursued waste, fraud and mismanagement [and] has the reputation of being one of the best inspector generals that we have in this town," Obama said. "I can't think of any more tenacious and efficient guardian of the hard-earned tax dollars the American people have entrusted us to wisely invest."

Vice President Biden, he added, will oversee the administration's stimulus spending implementation efforts "to make sure our efforts are not just swift, but also efficient and effective."

Obama also had harsh words for conservative critics of the stimulus plan who have argued that it contains needless pork barrel spending.

"When I hear people who say, 'Well, there's a lot of waste in this program,' from my perspective at least, keeping teachers in the classroom is not wasteful," he argued.

"If we agree on 90 percent of the stuff, and we're spending all our time on television arguing about 1 percent, 2 percent, 3 percent of the spending in this thing, and somehow it's been characterized in broad brush as wasteful spending, that starts sounding more like politics, and that's what right now we don't have time to do."

Some Republican governors, however, did not back off their criticism of the stimulus package.

It's "not apparent to me why they had to be in the stimulus package," said Jindal, who has been tapped to give the official Republican response to Obama's address to a joint session of Congress on Tuesday night.

Jindal, seen as a possible contender for the 2012 GOP presidential nomination, said his fellow Republican governors nevertheless wanted to give Obama "every opportunity" to succeed in sparking an economic recovery.

Though they support some federal action to help their states recover from the recession, several Republican governors have said they plan to turn down a portion of what's offered in the stimulus bill.

"If we were to take the unemployment reform package that they have, it would cause us to raise taxes on employment when the money runs out -- and the money will run out in a couple of years," Mississippi Gov. Haley Barbour told CNN's "State of the Union" on Sunday.

The Republican governors of Idaho, Alaska, Texas and South Carolina, as well as Louisiana's Jindal, have expressed similar concerns.

Their objections have mayors across the nations worried that their cities will be deprived of needed funding.

"Mayors know, better than anyone, that there are families suffering because of the recession in every state of this great nation," the U.S. Conference of Mayors said Monday in a letter to Obama.

"As a nation, we cannot allow our citizens and communities to needlessly suffer when assistance is available to help them survive and rebuild in these troubling times," the letter said.

The conference asked Obama's administration to devise a system that allows cities to have access to all the programs in the bill, even if an governor chooses to reject it.

When asked about broader complaints from South Carolina Gov. Mark Sanford about the debt that the stimulus package will produce, Schwarzenegger responded, "I am more than happy to take his money or [that of] any other governor in this country that doesn't want to take this money. I take it because I think California needs it."

He added that he does not foresee a need for a tax hike in the future to sustain the unemployment provisions.

In a separate interview on CNN's "State of the Union," Schwarzenegger said the complaints are "partially" right, but that using the money for now "cannot hurt."

Obama dismissed GOP concerns over costs tied an expansion of unemployment benefits, pointing out that those costs amount to only $7 billion in the $787 billion plan -- "a fraction of the overall stimulus package."

Gov. Linda Lingle, R-Hawaii, noted Monday that it's not unusual for some governors to choose to turn down federal money in certain circumstances.

All About Barack Obama • Medicaid