(CNN) -- Move over Wonder Woman and Lois Lane - Hillary Clinton and Sarah Palin are breaking into the world of comic books. 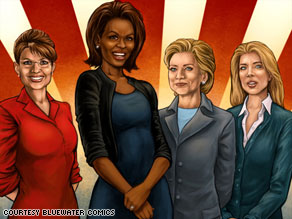 Washington-based publisher Bluewater Productions released a series of comic books featuring Secretary of State Hillary Clinton and Alaska Gov. Sarah Palin on March 11. The company says it has already sold 7,500 copies of each to distributors.

Another company released comics about President Barack Obama and Sen. John McCain during the presidential election.

Then they decided that Hillary Clinton's story needed to be told.

"She was the first [major] female presidential candidate, so we just started with [her], and there was so much interest in it," said Jason Schultz, executive vice president of Bluewater Productions.

The Michelle Obama comic is expected to be released in April, and has pre-sold 28,000 copies.

The next set will feature other "strong, independent women" such as Princess Diana, Schultz said.

Comic fans approve of the idea.

"I think it just says, like, that women are important," one comic book fan told CNN.

Another added, "It shows that comics aren't just about guys in tights beating each other up -- it's about information, it's about understanding people a little better," said another reader.

Richard Laermer, CEO of a public relations firm and author of several books on marketing, said he's not surprised.

The creators expect to expand the comic book world to a larger demographic with the books.

"It's bringing a whole new demographic to comic books," Schultz said. "It just shows little girls, young women, that they can be anything they want," he added.

Mary Ellen Balchunis, an assistant professor of political science at La Salle University in Philadelphia, Pennsylvania said "getting girls [interested in politics] at a younger age is brilliant."

"I think it's great that they're doing these comic books," Balchunis said. "In the past, women have shown a low level of political efficacy."

She said the choices are "fabulous," because "these are the women who are at the top of the totem pole right now."

Each comic will be biographical, Schultz said. "With Hillary, it starts with her life and ends up with her as Secretary of State."

"It would be fun to see how the superhero Hillary sort of pushes her way forth and shows people what she did in her life. To me that's just awesome," said Laermer.

Another professor of political science said the way the women are portrayed will be important.

"Comic books, by definition, are caricatures, but there are different ways of doing those caricatures," said Landon Storrs, an associate professor of history at the University of Houston.

"So it's a question of what the artists go for. If they just tap into familiar stereotypes, then they could reinforce negative ideas about powerful women, even as they are trying to do the opposite," she added.

The fact that real, living women are now in comic books is another barrier that Davis and Schultz have broken through, historian and author Trina Robbins said.

"It's about time. They've never done a major living woman," she said. "I think what's good is they're doing women in politics and not Paris Hilton."