WASHINGTON (CNN) -- President Barack Obama said Wednesday that the leaders of Afghanistan, Pakistan and the United States are meeting "as three sovereign nations joined by a common goal: to disrupt, dismantle and defeat" al Qaeda and the Taliban. 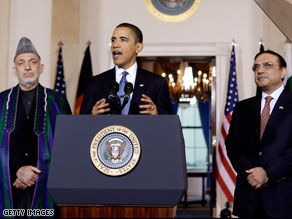 To do so, Obama said, the three nations have to deny extremists space to operate and bring a better life to the people of Afghanistan and Pakistan.

Obama, in remarks delivered with Afghan President Hamid Karzai and Pakistani President Asif Ali Zardari at the White House, said the security of Afghanistan, of Pakistan and of the United States are linked.

Al Qaeda and its allies are responsible for killing innocent civilians and challenging the democratically elected governments in the nations, Obama said.

The United States has made a "lasting commitment [that it] will not waiver" in efforts to defeat extremists and support the Afghan and Pakistani governments, he said.

Obama's remarks came after a day of talks with Karzai and Zardari designed to help forge a more coordinated strategy against the resurgent extremists.

Secretary of State Hillary Clinton held talks with the Afghan and Pakistani leaders earlier in the day. The talks were attended by the foreign, defense, intelligence and agriculture ministers from both countries and a number of heavyweights in the Obama administration, including U.S. envoy Richard Holbrooke, Gen. David Petraeus, CIA Director Leon Panetta, FBI Director Robert Mueller, and Secretary of Agriculture Tom Vilsack.

The diverse group, Clinton said, reflects the fact that "promoting peace must be an all-government effort."

The meetings are a continuation of a trilateral process started by Clinton in February, when she invited the foreign ministers of both countries to discuss Obama's strategy for stabilizing the region.

In addition to sending 21,000 more troops and trainers to Afghanistan, Obama has committed a surge in U.S. civilian personnel and aid to boost domestic support for both leaders, both considered weak and unpopular back home.

Clinton said the talks will address "concrete initiatives" on improving security, boosting economic development and trade and increasing opportunities for both populations.

"I like to know specifically what we're going to try to do together," she said. "I like us to reach agreement on that. And then to specify the steps we will take together to achieve our common goals. I think that helps to eliminate the confusion that comes with distance and misunderstanding."

Clinton said she "deeply regretted" the killing of Afghan civilians during a U.S. airstrike Tuesday in western Afghanistan and pledged to both leaders the United States "will work very hard with your governments and with your leaders to avoid the loss of innocent civilian lives."

Karzai thanked her for her comment and said he hopes the two countries can work together to avoid civilian casualties "as we move ahead in our war on terrorism."

The U.S. military's preliminary investigation into the airstrike, however, found that as many as 15 Afghan civilians believed to be killed in the strike were actually killed when Taliban militants attacked them with hand grenades, according to a senior U.S. military official.U.S. probing Afghan civilians' deaths

The militants then paraded the civilians' bodies through villages, claiming the deaths were the result of the airstrike, the official added.

The talks come amid growing U.S. frustration with the lack of progress by both countries in fighting extremists.

In particular, the Obama administration has voiced increased concern about recent Taliban and al Qaeda gains across much of southern Afghanistan and in Pakistan.

The U.S. military has carried out air strikes against militant targets in Pakistan, after Zardari's government was criticized for not cracking down on militants along the Afghan border. The unmanned drone attacks have rankled relations between Pakistan and Washington.

Pakistan's government recently signed a deal that would allow Islamic law, or sharia, in the Swat Valley, in exchange for an end to fighting. The government began a military offensive after Taliban militants moved into the Buner district and refused to disarm in violation of the agreement.

The United States has also accused Karzai's government in Afghanistan of being ineffective and corrupt. Karzai further angered the United States this week when he named Mohammad Qasim Fahim, a powerful warlord accused of violating human rights, as a vice-presidential running mate, despite warnings from Clinton that Fahim would be a polarizing choice.

"We are not perfect," Clinton told the leaders. "No human being is. We will make mistakes, but we need to have the kind of open dialogue, where we express our concerns about those mistakes."

Zardari and Karzai pledged to work together with the United States to combat extremists and stabilize their two countries.

"While we will need high level of support in days to come, we will also be far more transparent in our actions," Zardari told the group. "Here, me, my friend, President Karzai, and the United States assure the world, that we will stand shoulder to shoulder with the world to fight this cancer and this threat."

Pakistani democracy, he added, will defeat terrorism and "avenge the death" of his wife, slain former Prime Minister Benazir Bhutto, who was killed in late 2007.

Clinton called Bhutto an "extraordinary leader" and acknowledged the couple's young son, Bilawal Bhutto Zardari, who attended the talks. He is the chairman of the ruling Pakistan Peoples Party and heir apparent to the Bhutto dynasty.

Calling the United States his country's "most valued" strategic ally," Karzai said, "I'm certain, through the implementation of the strategy outlined earlier by President Obama, will bring us the needed relief towards better, more peaceful life in both of our countries."

He promised Afghanistan will work hard to "do the right thing" to build confidence and trust with Pakistan to "wage a more effective struggle against the menace of terrorism and the violence that radicalism causes both in Pakistan and in Afghanistan and the danger that they pose to you in America and the rest of the world."

The two leaders signed a trade and transit agreement aimed at increasing commerce and foreign investment in the two countries and will be visiting key congressional leaders and policymakers about U.S. efforts to boost both countries' economies.

A bill called the Enhanced Partnership with Pakistan Act of 2009, introduced by Sens. John Kerry, D-Massachusetts, and Dick Lugar, R-Indiana, would authorize $7.5 billion in non-military aid to Pakistan over the next five years to foster economic growth and development, and another $7.5 billion for the following five years.

CNN's Elise Labott and Barbara Starr contributed to this report.