WASHINGTON (CNN) -- The United States replaced the top allied commander in Afghanistan on Monday, deciding "fresh eyes" are needed to reverse the course of the seven-year-old war there, Defense Secretary Robert Gates said. 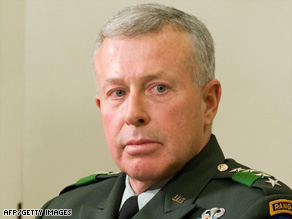 Gen. David McKiernan is being replaced as commander of NATO forces in Afghanistan.

Gen. David McKiernan, who has held the post for less than a year, will be replaced by Lt. Gen. Stanley McChrystal, a former special operations chief, Gates announced. He told reporters there was "nothing specific" behind McKiernan's removal, but that "new leadership and fresh eyes" were needed in a war that Washington admits it is not winning.

"We have a new strategy, a new mission and a new ambassador. I believe that new military leadership also is needed," Gates said.

McKiernan will remain in place until the Senate confirms the appointments of McChrystal and his designated deputy, Lt. Gen. David Rodriguez. Both have previous experience in Afghanistan and more history with counterinsurgency operations than McKiernan.

Adm. Mike Mullen, the chairman of the Joint Chiefs of Staff, said in March that the Afghan war "is winnable, but we are not winning." Since taking office in January, President Obama has committed an additional 21,000 troops and trainers to Afghanistan in an effort to battle a resurgent Taliban and signed off on McKiernan's replacement, the White House said.

"The president was grateful for and impressed by the leadership that Gen. McKiernan demonstrated in calling for additional resources for the fight in Afghanistan," the White House said in a written statement. "This change of direction in Afghanistan in no way diminishes the president's deep respect for Gen. McKiernan and his decades of public service."

And in a statement of his own, McKiernan said the U.S. military "must remain committed to the great people of Afghanistan."

"While the Taliban and other terrorist groups offer only lies and fear, our continued efforts promote freedom and hope," he said.

A total of 1,135 allied troops, including 678 Americans, have been killed in Afghanistan since the war began. The Taliban. meanwhile, has taken root in neighboring Pakistan, which launched a new offensive against the militants last week.

McChrystal and Rodriguez "bring a unique skill set in counterinsurgency to these issues, and I think that they will provide the kind of new leadership and fresh thinking that the admiral and I have been talking about," Gates said.

Gates' announcement came less than a week after Obama met with the presidents of Afghanistan and Pakistan and pledged a more coordinated effort to defeat the insurgents. Afghanistan, meanwhile, has been complaining about civilian deaths in U.S. airstrikes, including one last week that killed dozens of people.

"There is a tremendous effort going on, on our part to try and avoid civilian casualties," he said. "But figuring out how to come out better on the strategic communications side of this is an ongoing challenge for us."

All About Afghanistan War