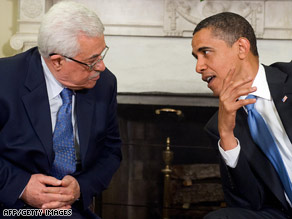 "I am confident that we can move this process forward if all the parties are willing to take on the responsibilities and meet the obligations that they've already committed to," Obama told reporters in a joint appearance with Abbas following the White House meeting.

Abbas said his Palestinian Authority was committed to fulfilling its obligations under the 2003 Middle East road map.

The two men called for immediate progress in the peace process that could lead to renewed direct talks between the Palestinians and the Israeli government. No formal Palestinian-Israeli negotiations have occurred since Israeli elections in February brought Prime Minister Benjamin Netanyahu to power.

"What is needed right now is to resume the discussions with the current Israeli government," Abbas said.

The talks came days before Obama is scheduled to meet with Saudi King Abdullah in Riyadh and deliver a long-awaited speech on relations between the United States and the Muslim world in Cairo, Egypt

Netanyahu has committed to removing illegal settlement "outposts" but has also pledged to continue expansion, or "natural growth," of existing settlements.

At the same time, Netanyahu has refrained from endorsing Palestinian statehood, arguing that Israel first needs security guarantees and a clear Palestinian partner for peace talks.

A total of 295,000 Israelis live in the West Bank, according to the Council for Peace and Security Talks. Another 194,000 live in the disputed area of East Jerusalem.

Obama said Thursday it was in the interest of Israel, the Palestinians and the United States for both sides to show their commitment to the two-state solution proposed by the 2003 road map.

"It is in our interest to ensure that Israel is safe and secure," he said, adding that the best way to achieve that is to create the necessary conditions to "set the stage for a Palestinian state."

"I'm confident that if Israel looks long-term -- looks at its long-term strategic interests -- that it will recognize that a two-state solution is in the interests of the Israeli people as well as the Palestinians," Obama said.

At the same time, Obama said he told President Abbas "in a frank exchange" that continuing anti-Israel sentiments and incitements in Palestinian schools, mosques and public squares were "impediments to peace."

The Palestinian Authority headed by Abbas holds power on the West Bank, while the militant Palestinian Islamist group Hamas controls Gaza. Obama noted that Abbas is under pressure to negotiate with Hamas on creating a unified Palestinian leadership, and praised him for insisting that such a Palestinian leadership must agree to Israel's right to exist and commit itself to peace.

"I want to publicly commend President Abbas for taking that position, because I think it's in the interest of the Palestinian people and the people of the region," Obama said.

The struggle to balance Palestinian sovereignty and Israeli security was highlighted earlier Thursday, when Israeli anti-terror forces killed a suspected Hamas military leader in a West Bank village south of Hebron. Israel accused 45-year-old Aded El Majid Dodeen, of, among other things, involvement in suicide bombings on buses in Jerusalem.

Abbas' meeting with Obama comes at what many observers believe is a pivotal time in the Middle East peace process.

"There is a critical window of opportunity, and it would be sensible for us to pass through it," former British Prime Minister Tony Blair told members of the Senate Foreign Relations Committee two weeks ago.

Blair has served as the United Nations' primary Middle East envoy since stepping down as Britain's prime minister in 2007.

"We have a new [United States] administration that has come in and from the outset has said, 'This is a priority for us,' " he said.

"You have the Arab peace initiative, which signals that the Arab world is prepared to recognize Israel and to be part of this process. You have a basically unified international community position" in favor of a two-state solution.

"If we cannot move this forward now, I think the risk is, there will be many people within Israel and within the Palestinian territories who will conclude it can't be moved forward."

But without proper security, a Palestinian state will continue to be viewed as a threat rather than an opportunity for Israelis, Blair argued.

At the same time, many observers say, the Palestinians need greater economic opportunity and more complete control over their territory.