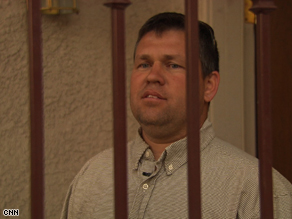 Neal Williams has installed both high- and low-tech security as crime has risen in his neighborhood in decline.

LAS VEGAS, Nevada (CNN) -- Neal Williams carefully picked his house 14 years ago with his wife and children in mind.

"Just a nice neighborhood," is how he recalls it. "A lot of comfortable people to be around. Enjoyable nights ... walk around and walk down the street and say hi, talk to people."

"I have sat in my upstairs windows and watched kids trying to break into a house next door," Williams laments.

One of his windows was recently broken, and he came home one day to see evidence someone had tried to kick in his door. He has installed new security systems, some high-tech, and also taken a low-tech precaution of deliberately not applying oil to a gate hinge.

"This is my infamous squeaky gate," he tells a recent visitor. "That is one of my alarms."

Las Vegas is in many ways ground zero of the nation's housing crisis. "Bank Owned" signs are visible all over town -- so many foreclosures, in fact, that local real estate brokers have set up bus tours to take potential buyers and investors around town.

Some agents are beginning to see evidence of progress. They report that inventory is down some and that more properties now bring multiple offers.

Williams, however, says all he sees are the downsides.

There are many vacant homes in his neighborhood because of foreclosures, and others have been rented out by banks that can't sell them. And with renters, he says, the sense of community has given way to more trash, graffiti and worse.

"There was a shooting just recently a couple of doors down," Williams said. "We've been robbed on several occasions."

There is a financial price as well; Williams is current on his mortgage, but his home's value has collapsed.

Watch the pain and joy of the Vegas housing market »

"I'm scared to look -- really scared to look," Williams says. "I know it has gone down quite a bit. My wife says more than half. I honestly don't know."

His neighbor of just six months is moving, at a big loss, because of the rising crime. But not Williams.

"Do I want to put up with the embarrassment of people saying, 'You look like you live in a prison?' Yeah I'll deal with that embarrassment, but I know that I am safer and that is how I look at it."

"Well I'm a stubborn son of a gun. This is my house. This is where I am staying."

Only a few miles away is what you might call the flip side of the foreclosure fallout.

Donald Leffert and his wife, Robyn Eddy-Leffert, just moved into their first home.

"It was pre-wired for stuff --- networking," Donald said. "It was in a location we wanted. There was very little that needs to be done."

They had been looking at condos, but the crash in housing prices made bigger homes within reach. While checking out the yard, Donald found the stunning evidence: The real estate brochure from when the house was on the market two years ago.

It is identical to his brochure, with two exceptions.

"Everything else on the paper is exactly the same," Donald says as he puts the papers side by side. "The only difference is the date and the price."

A few small toys they found while preparing to move in makes them mindful their joy comes at the expense of some other family's foreclosure.

"It's pretty sad when you think about the people who have lost their homes," Eddy-Leffert said. "You can't go into a house thinking of it being someone else's house or someone's home."