NOGALES, Arizona (CNN) -- The Black Hawk helicopter swoops across the hot, windblown Arizona desert and settles onto a cement pad. 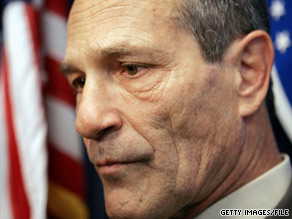 The new U.S. border czar, Alan Bersin, has arrived to inspect operations at one of his most critical facilities, the Maricopa port of entry outside Nogales, Arizona.

It's the largest port of entry in Arizona, handling about 1,500 commercial trucks a day, making it a major trade corridor between the United States and Mexico, Officer James Tong of U.S. Customs and Border Protection tells Bersin.

It is also a major corridor for the smuggling of cocaine, heroin and marijuana into the U.S.

Last year, 37,000 pounds of marijuana were seized along this arid stretch of border. And on the day of Bersin's visit, two teenage girls were caught trying to sneak heroin past border guards in Nogales.

"That told me that in reaction to increased enforcement ... the cartels are ... recruiting teenagers as their new couriers," Bersin said.

Bersin said the Obama administration is forging a new alliance with Mexico in the campaign to combat the drug cartels.

"This is now viewed as a set of problems that we share in common," he said.

The cartels are implicated in more than 7,000 killings last year, including the assassination of police, judges and high-ranking government officials.

The solution, he said, is to stop not only the flood of drugs to the north, but also the flood of guns and money south into Mexico. His troops are charged with stopping the traffic in both directions. He was told that so far this year more than $2 million in narco dollars have been seized in Nogales.

Bersin's trip to Arizona is part of a weeklong blitz of the U.S.-Mexico border, from Texas to California. He said his appointment as the nation's first border czar reflects the seriousness of the smuggling issue.

"It is a national security issue," he said.

The other hot-button issue on the border, illegal immigration, has taken something of a back seat in Bersin's trip to the Southwest.

In fact, illegal immigration is down more than 30 percent over this time last year, Bersin said; the poor economy is the major reason cited. Apprehensions of illegal border crossers are at low levels not seen since the 1970s, he said.

"They are different problems caused by different situations. ... We feel the impacts at the border, but indeed the issues are separate."

People in Nogales are anticipating a hefty share of those monies. Recently acquired X-ray equipment is already searching trucks coming across the border for signs of drug and human smuggling. And Customs and Border Protection officers are looking more closely for guns and money headed in the opposite direction.

Just one week before Bersin's visit, customs officers were filling with cement an underground tunnel that led from Mexico into the United States -- a pathway for the drug cartels, authorities said.

It was the 16th such tunnel to be destroyed in more than six months.