L'AQUILA, Italy (CNN) -- President Obama argued Friday that the Group of Eight nations had sent a clear message to Iran: The world will not "wait indefinitely" and allow the country to build nuclear weapons. 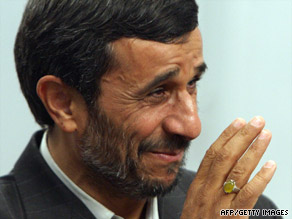 "If Iran chooses not to walk through that door, then you have on record the G-8 to begin with, but I think potentially a lot of other countries, that are going to say, 'We need to take further steps.' "

Obama met with some fellow leaders to push for a threat of potential new sanctions against Iran, but the G-8 did not issue such a threat.

Obama -- who has promised diplomatic engagement with Tehran -- said offering a "door" has always been "our premise."

"But we also say we're not going to just wait indefinitely and allow for the development of the nuclear weapon, the breach of international treaties, and wake up one day and find ourselves in a much worse situation and unable to act. So my hope is that the Iranian leadership will look at the statement coming out of the G-8 and recognize that world opinion is clear."

The G-8 statement expressed commitment "to finding a diplomatic solution to the issue of Iran's nuclear program" and said Iran "has the right to a civilian nuclear program, but that comes with the responsibility to restore confidence in the exclusively peaceful nature of its nuclear activities."

"We sincerely hope that Iran will seize this opportunity to give diplomacy a chance to find a negotiated solution to the nuclear issue," the statement said.

Reports said Obama met with some fellow leaders to push for a threat of potential new sanctions against Iran in the wake of the government's crackdown on protesters following the disputed June 12 election.

Obama denied those reports, saying, "What we wanted was exactly what we got, which is a statement of unity and strong condemnation about the appalling treatment of peaceful protesters post-election in Iran as well as some behavior that just violates basic international norms."

The G-8 statement said the group "deplores" the violence.

"We express our solidarity with those who have suffered repression while peacefully demonstrating and urge Iran to respect fundamental human rights," the statement said.