WASHINGTON (CNN) -- CIA Director Leon Panetta testified to a congressional committee that he was told former Vice President Dick Cheney ordered the intelligence agency to withhold information about a secret counterterrorism program from Congress, the chairman of the Senate Intelligence Committee said Sunday. 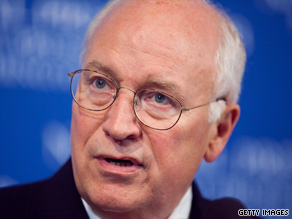 Sen. Dianne Feinstein, D-California, told the "FOX News Sunday" program that Panetta testified that "he was told that the vice president had ordered that the program not be briefed to the Congress."

The disclosure by Panetta to both the Senate and House intelligence committees about Cheney's involvement was first reported in The New York Times. Efforts to contact Cheney for reaction were unsuccessful.

CIA spokesman Paul Gimigliano declined to comment on the report.

"It's not agency practice to discuss what may or may not have been said in a classified briefing," Gimigliano said. "When a CIA unit brought this matter to Director Panetta's attention, it was with the recommendation that it be shared with Congress. That was also his view, and he took swift, decisive action to put it into effect."

Panetta briefed lawmakers on June 24 on an unspecified counterterrorism program, according to a letter from seven House Democrats to Panetta made public Wednesday. The June 26 letter characterized Panetta as testifying that the CIA "concealed significant actions from all members of Congress, and misled members for a number of years from 2001 to this week."

A knowledgeable source familiar with the matter said the counterterrorism program in question was initiated shortly after the September 11, 2001, attacks on New York and Washington.

The program was on-again, off-again and was never fully operational, but was rather a tool put on the shelf that could have been used, the source said. Panetta has put an end to the program, according to the source.

The disclosures follow a May spat between the spy agency and House Speaker Nancy Pelosi, who accused the CIA of misleading Congress during a secret 2002 briefing on harsh interrogation techniques being used on terrorism suspects. The CIA responded that Pelosi was told about the harsh techniques, including waterboarding, at the briefing.

The latest revelations come as lawmakers consider expanding the number of House and Senate members privy to the kind of secret briefing that Pelosi received.

The White House opposes a measure that would increase the number of briefing participants from the current eight to 40 members of Congress. A White House memo warned President Obama's senior advisers would recommend a veto of the bill if it contained the expanded briefing provision.

On Sunday morning news shows, Democratic and Republican legislators sparred over the significance of the withholding of information from Congress.

Republicans agreed that the CIA should comply with all disclosure laws, but questioned if the program Panetta talked about to the intelligence committees met the required threshold.

They also said such disclosures harm the morale of the CIA, and some wondered if the revelation of Panetta's testimony was a Democratic ploy to support Pelosi's allegation that the agency misled Congress.

"This looks to me suspiciously like an attempt to provide political cover to her," Republican Sen. John Cornyn of Texas said on FOX. "I agree with Senator Feinstein -- the CIA should brief the Congress. Congress should exercise responsible oversight. But to trot out the vice president and say he's the one that's at fault, this ... unfortunately sounds like a new theme where they still want to blame the Bush-Cheney administration for the economy and for other things."

Democrats responded that the central issue was the possible violation of laws intended to maintain a vital check on the power of the CIA.

"This is a question of whether the former vice president of the United States denied certain sensitive information to the intelligence leaders in Congress," said Sen. Kent Conrad, D-North Dakota. "That is not acceptable."

The Democrats also praised Panetta for immediately notifying the intelligence committees and canceling the secret program once he learned of it.