(CNN) -- One of the enduring myths about Supreme Court justices is that they often turn out to "surprise" the presidents who appoint them. Sure-thing conservatives, it is said, turn out to be liberals, ­and vice versa. In fact, the evidence is almost entirely the opposite: that with justices, as in life, what you see is what you get. 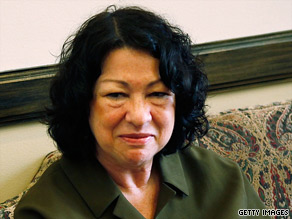 Sonia Sotomayor appears to view the Constitution much like retired Justice David Souter did.

The question, then, is this: What do you see when you look at Sonia Sotomayor?

She is, above all, a veteran judge ­who has 18 years on the federal bench: six as a trial judge (appointed by President George H.W. Bush) and the rest on the court of appeals (appointed by President Clinton). The question of competence is closed. Sotomayor can do the job. It's no surprise that she received a unanimous rating of well-qualified from the American Bar Association screening committee.

But what would she stand for as a Supreme Court justice? She is, it seems, a liberal,­ but a liberal in the cautious and careful mode of her likely future colleagues Ruth Bader Ginsburg and Stephen Breyer.

Her leanings are clearest in the case of affirmative action. As a political and constitutional matter, she believes government can take steps to assure a diverse work force or student body.

This view was on display in the most famous (or infamous) decision of her career.

She joined the majority in a short opinion upholding the city of New Haven's cancellation of a firefighters' promotion exam after no African-Americans scored in the top group. The Connecticut city did so because of worries that if the promotions went forward, the African-Americans might sue. Instead, the white firefighters, led by Frank Ricci, sued the city.

The trial court ruled for the city, and a three-judge panel (including Sotomayor) affirmed, but the Supreme Court, in a 5-4 decision last month, overturned that ruling and held that Ricci had been a victim of reverse discrimination.

In truth, Sotomayor was mostly following existing precedent in ruling for the city. And Souter, whose seat Sotomayor would take, voted on her side. But her view of the case portends major conflict with at least some of the other justices, including the chief, John G. Roberts Jr., because they are increasingly committed to the idea of a "color-blind" Constitution, which prohibits the use of any preferences based on race.

Sotomayor's record is pretty empty when it comes to the subject of abortion; she just hasn't decided any cases that forced her to address the issue. But everything about her, including the fact that President Obama nominated her, suggests that she will support abortion rights. In other words, this is not a justice who will vote to overturn Roe v. Wade.

But nor is she going to be a supporter of abortion proponents in all circumstances. In 2002, abortion rights supporters challenged the Bush administration's "global gag rule," which said that international family planning money could not go to groups that advocated abortion. Sotomayor ruled for the Bush administration, saying, in effect, that he who pays the piper can call the tune.

On free speech, though, Sotomayor appears to be a strong defender, even more so than most of the current justices.

In a 2002 case, the New York City Police Department had fired an officer who had anonymously sent racist and anti-Semitic mailings to certain charities. Her two colleagues approved the dismissal, but Sotomayor dissented, writing, "To be sure, I find the speech in this case patently offensive. The Court should not, however, gloss over three decades of jurisprudence and the centrality of First Amendment freedoms in our lives because it is confronted with speech it does not like and because a government employer fears a potential public response that it alone precipitated."

At a time when most courts, including the Supreme Court, are cutting back on the free speech rights of employees, Sotomayor's ringing words are startling.

But on criminal law, Sotomayor may lean more to the conservative side, at least compared with Souter.

As a former prosecutor, Sotomayor appears to feel disinclined to overturn criminal convictions. She even proceeded with a death penalty case, though the defendant pleaded guilty to lesser charges to avoid execution.

She's said little, on the other hand, about gun control. In one case, she said that the Second Amendment's protections of the right to bear arms only applies to the federal government, not the states. But other courts have said the same thing; it's up to the Supreme Court to instruct the lower courts otherwise on that issue.

So the record does seem clear that Sotomayor generally views the Constitution much like Souter did. But nothing can fully prepare a judge for the moment she joins the Supreme Court.

Soon, it seems likely, Sonia Sotomayor will know what it is like to have the last word.