(CNN) -- California's Gov. Arnold Schwarzenegger ruffled feathers this week by posting a video on Twitter, in which he brandishes a large knife while talking about the state's recent budget cuts. 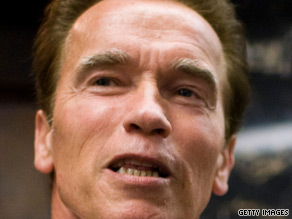 Schwarzenegger announced a major plan Monday to eliminate California's $26 billion deficit, with state agencies looking at billions of dollars in cuts as part of the plan.

On Tuesday, the Hollywood actor turned governor posted a video, in which he handles a 2-foot-long knife before thanking Californians for providing him with creative ideas for slashing the budget.

By Wednesday, critics had emerged, some wondering how Schwarzenegger could post a lighthearted video about a proposed budget plan that could slash services for needy people.

Watch the governor wield his knife »

The governor addressed the critics at a news conference, saying that though the budget process was tough he had not lost his sense of humor.

California lawmakers will have to make about $15 billion in cuts in Schwarzenegger's new plan to balance the state budget.

He said details would be publicly released soon, after legislative leaders discuss the plan with their caucuses. A vote could come by Thursday night, Schwarzenegger said.

The state's budget impasse forced California to issue IOUs this month to stave off a nearly $3 billion shortfall for July. Some county agencies, state vendors and taxpayers are being paid in paper.

All About California • Sacramento