WASHINGTON (CNN) -- Top U.S. and Chinese officials launched an expanded discussion of the crucial relationship between their two countries Monday, holding the first meeting of a "Strategic and Economic Dialogue" in Washington. 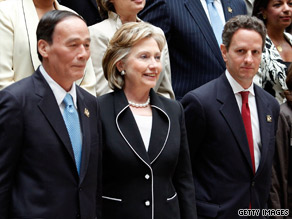 The dialogue is intended to address a series of issues, including the two countries' response to the global financial crisis, climate change, nuclear proliferation, and the ongoing conflict with religious and other extremists.

"The relationship between the United States and China will shape the 21st century, which makes it as important as any bilateral relationship in the world. That reality must underpin our partnership. That is the responsibility we bear," Obama said.

Noting that the United States and China are the world's two largest energy-consuming countries, Obama pushed for more cooperation from the Chinese government to help reduce carbon emissions.

"Let's be frank: neither of us profits from a growing dependence on foreign oil, nor can we spare our people from the ravages of climate change unless we cooperate. Common sense calls upon us to act," he said.

The Chinese government has been reluctant to sign on to international agreements that, according to some analysts, could slow its rapid economic growth.

Obama also acknowledged the sharp differences between the two countries on the issue of human rights, admitting that he has no "illusions that the United States and China will agree on every issue."

The president bluntly stated that "all people should be free to speak their minds. That includes ethnic and religious minorities in China."

"Mankind's pursuit of ... progress never ceases," he said. "I'm confident this crisis will finally be over."

In an op-ed article in Monday's Wall Street Journal, Clinton and Geithner said the two-day meeting should help "develop a new framework for U.S.-China relations."

"Few global problems can be solved by the U.S. or China alone. And few can be solved without the U.S. and China together," they said. Those problems include the global economy, the health of the global environment, the stability of fragile states and the solution to nonproliferation challenges.

On the economy, Clinton and Geithner praised the United States and China for taking "bold steps" to deal with the global economic crisis. Now, they said, Americans must rebuild their savings, strengthen the U.S. financial system and invest in energy, education and health care. China, they argued, must continue financial sector reform and development as well as spur domestic demand and make the Chinese economy less reliant on exports.

"Raising personal incomes and strengthening the social safety net to address the reasons why Chinese feel compelled to save so much would provide a powerful boost to Chinese domestic demand and global growth," they said.

On security issues, Clinton and Geithner highlighted the "provocative actions of North Korea," stability in Afghanistan and Pakistan, and economic possibilities in Africa.

Obama administration officials say a key purpose of the new dialogue is to expand a relationship which they argue became exclusively focused on economic issues during the Bush administration.