WASHINGTON (CNN) -- Four senators pushed for a bill Wednesday to ban texting while driving, a day after a study found that drivers who text while on the road are much more likely to have an accident than undistracted drivers. 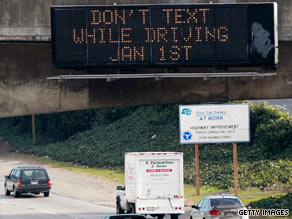 A law that went into effect January 1 in California makes it illegal to send text messages while driving.

The proposed legislation would prohibit any driver from sending text or e-mail messages while driving a vehicle, said an earlier news release from the senators.

If the bill passes, the Department of Transportation would set the minimum standards for compliance.

States that do not enact text-banning laws within two years of the bill's passage could lose 25 percent of their federal highway funds, Schumer said in a news conference announcing the legislation. The noncompliant states could recuperate that money once they meet the text-banning standards, Schumer said.

"CTIA and our member companies continue to believe text messaging while driving is incompatible with safe driving," said a statement on CTIA's Web site.

New York does not ban texting while driving but has barred the use of handheld phones while driving, according to the Governor's Highway Safety Association. Schumer said New York's legislature has sent Gov. David Paterson a bill to ban texting as well.

"The legislation will send an important message to drivers across the country: Get your hands off the cell phone and back on the wheel," Schumer said.

The senators cited a Virginia Tech Transportation Institute study that found that truck drivers who texted while driving were 23 times more likely to crash or get into a near-accident than undistracted drivers. Watch more on the dangers of driving and texting

When compared with dialing, talking, listening or reaching for an electronic device, texting posed the greatest accident risk, the study found. It attributed the increased risk to the almost five seconds it found that the driver's eyes were off the roadway while texting, said Rich Hanowski, the director of the Center for Truck and Bus Safety at the transportation institute.

"Not having [a cell phone] in your hand while driving could be the difference between life and death," Menendez said.

In September, a commuter train engineer missed a stop signal while trading text messages with a friend, leading to a collision with a freight train that killed 25 people in California, according to federal investigators. The accident also injured 101 people.

In May, 62 people were injured when one trolley struck another in Boston, Massachusetts, the Massachusetts Bay Transportation Authority said. In July, the operator of one trolley was charged with gross negligence after he admitted to texting seconds before the accident with the other trolley, according to the Suffolk County district attorney and a National Transportation Safety Board official.