Clinton says trial shows Iran 'is afraid of its own people'

NAIROBI, Kenya (CNN) -- Iran's trial of more than 100 people who it has linked to post-election unrest is a "sign of weakness" and shows that the Islamic republic "is afraid of its own people," U.S. Secretary of State Hillary Clinton told CNN Thursday. 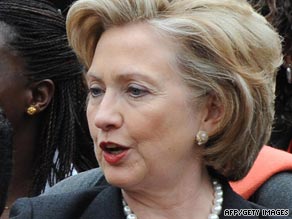 Iran is "afraid of the truth and the facts coming out," Secretary of State Hillary Clinton said.

"It is a show trial, there's no doubt about it," Clinton told CNN's Fareed Zakaria in a wide-ranging interview to be broadcast on his "GPS" program Sunday.

"It demonstrates I think better than any of us could ever say that this Iranian leadership is afraid of their own people, and afraid of the truth and the facts coming out."

Clinton spoke to Zakaria during her visit to Africa.

Those on trial include Newsweek reporter Maziar Bahari, who has dual citizenship in Iran and Canada, and Kian Tajbakhsh, an Iranian-American scholar. The trial, which began over the weekend, is scheduled to resume Saturday, according to Iran's semi-official Fars News Agency.

This week, the State Department issued a statement expressing deep concern for Tajbakhsh.

"Given that the charges facing Mr. Tajbakhsh are without foundation, we call on Iran's leadership to release Mr. Tajbakhsh without delay," State Department spokesman Robert Wood said Tuesday, reading a prepared statement. "He has played absolutely no role in the election and poses no threat to the Iranian government or its national security."

Wood said Tajbakhsh has not been provided an attorney, which he is entitled to, and warned Iran that "the world is watching what is happening in Iran and will bear witness."

Speaking on Thursday, Clinton said the United States also has "expressed our concern about Mr. Bahari's confinement and trial" to Canada's government, and offered its help.

All of those on trial in Iran -- who include Iranian journalists and supporters of the opposition -- have been charged for their alleged roles in protests that followed last month's disputed presidential election.

Fareed Zakaria talks Secretary of State Hillary Clinton during her multination trip to Africa on "GPS."
1 and 5 p.m. ET Sunday

The June 12 election gave President Mahmoud Ahmadinejad a second term in office, but it also sparked a massive opposition movement that has regularly protested against the Iranian leadership and has shaken the foundation of Iran's Islamic theocracy.

Those on trial will be placed into three categories, according to Fars: the "plotters, intriguers, and planners of the riots"; "the antagonists and those affiliated to foreign services"; and "the opportunists, hooligans, and hoodlums who set ablaze, or destroyed private and public properties, and those that have had hands in disturbing public security."