(CNN) -- A controversial bill that California legislators say would allow the early release of more than 27,000 inmates from crowded prisons will be taken up by the state Assembly on Monday. 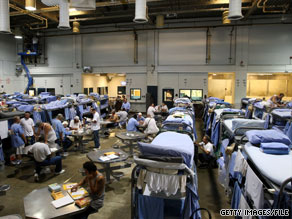 Inmates at Mule Creek State Prison in Ione, California, interact in a gym modified to house them in August 2007.

The Senate on Thursday passed the corrections package 21-19, after Senate President Pro Tem Darrell Steinberg, D-Sacramento, assured senators the changes would protect the public from the most violent offenders.

The legislation also would direct more resources toward parolees, he said.

Both houses of the legislature are controlled by Democrats.

Consideration of the bill comes as California faces a mid-September deadline for reducing its prison population by about 40,000 inmates. A special panel of three federal judges issued the order, contending the crowded prison system violates prisoners' constitutional rights.

The judges said they will make the reductions themselves if the state fails to act.

The measure would save the financially strapped state $524.5 million, according to a statement from Steinberg's office.

When coupled with budget revisions that lawmakers made in July, the total corrections savings would be $1.2 billion, he said. That is the amount that Republican Gov. Arnold Schwarzenegger wants as part of his efforts to cut state spending and balance the budget.

"It is undeniable that the real failure of our criminal justice system is that it fails to distinguish between violent offenders and nonviolent offenders," Steinberg said.

"Of course, we want to keep violent criminals off our streets and out of our communities, and this reform package is a necessary step to do that because it concentrates our incarceration efforts on the violent criminals and ensures that nonviolent offenders have more contact with parole officers," he said.

According to Steinberg, each parole officer in California is responsible for about 70 parolees, many of whom recommit crimes and go back to jail. If the legislation is passed, the ratio would be reduced to 45 to 1, he said.

Senate Republicans called the legislation a threat to public safety.

"Among the inmates who could be eligible for early release under the Democrat plan include felons convicted of human trafficking, stalking, identity theft, violent child abuse and threatening to use a weapon of mass destruction," the Republican Caucus said in a written statement.

GOP lawmakers in the Senate also strongly opposed the creation of what they described as "an unelected and unaccountable sentencing commission that would be given broad authority to alter important public safety laws."

The legislation would establish a 16-member Sentencing Commission that would put in place new sentencing guidelines by July 1, 2012. Unless vetoed by the legislature and governor, the guidelines would become effective January 1, 2013.

The 13 voting members of the commission would include the chief justice of the California Supreme Court, a judge appointed by the chief justice, the state public defender and the secretary of the Department of Corrections and Rehabilitation. A crime victim would be among the three ex-officio members.

On Thursday and into Friday morning, she said in the statement, "we have been taking into account many of the concerns raised by law enforcement, and are working toward a bill that the people of California can agree makes sense," and that process will continue through the weekend.

"Our target remains a responsible approach that will achieve our public safety and budgetary goals, and allow us to prevent the wholesale release of prisoners by federal judges."

"Relieving prison overcrowding and reducing recidivism are monumental challenges, but they are challenges that we will not retreat from," Schwarzenegger told an audience of prosecutors in June.

California has a 70 percent recidivism rate.

All About Prisons • Arnold Schwarzenegger • Criminal Sentencing and Punishment • California