(CNN) -- When President Obama unveiled the Making Home Affordable Program in March, he said it would help "responsible folks who have been making their payments" reduce their monthly mortgage bills and avoid losing their homes to foreclosure. 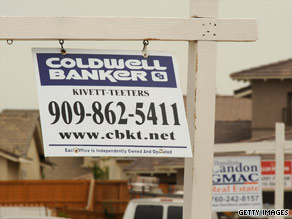 But six months into the program, only 6 percent of the 4 million eligible homeowners have gotten help. A lot more say they've been frustrated with the runaround they've been getting from lenders.

Are the new program's growing pains responsible for the slow start, as bankers say, or is pain to their bottom lines really preventing the program from working, as critics say?

The Making Home Affordable Program is supposed to work this way:

In return for billions of dollars in taxpayer bailout money, banks would offer loans that would reduce troubled borrowers' monthly mortgage payments to 31 percent of their income. To qualify, a homeowner must have an income and must live in the house, and that house can't be worth more than $730,000.

The bank is also allowed to calculate the value of the mortgage against the profit it would make from a foreclosure.

Banks are prohibited from selling a house in foreclosure while the homeowner is being considered for an adjustment. The Treasury Department oversees the program, and the banks signed contracts with Treasury binding them to cooperate. Watch more about how the program has worked so far

Have a complaint about your bank and Making Home Affordable?

When will an agent pass on the complaint to higher-ups?

If you have been told to skip payments to qualify

If you have been told to pay a fee to qualify

If your lender is "improperly applying the program's guidelines"

Treasury Secretary Timothy Geithner has been so unhappy with the program's pace that he called in lenders for a meeting and demanded they do better.

In a July 9 letter to one servicer, JP Morgan, Geithner and Shaun Donovan, secretary of Housing and Urban Development, wrote "there is a general need for servicers to devote substantially more resources to this program for it to fully succeed and achieve the objectives we share."

They called on the banks to hire more staff, expand their call centers and allow homeowners "an escalation path for borrowers dissatisfied with the service they have received."

The mortgage industry's top lobbyist says any problems to date are the growing pains associated with getting such a massive program up and running.

"It is working, and it needs to be given some time," says John Courson, head of the Mortgage Bankers Association. He says banks are still staffing up and getting the program off the ground. "It took 90 days to get out the rules and the procedures and the forms, and so that's a fairly new program," he said.

He insists that the banks want to cooperate.

"It's in the banks' best interest to work with those borrowers to keep those loans on the books and avoid foreclosure," Courson said.

But critics say that the program works against the banks' best interests, as the homeowners who most need the program are the riskiest bets.

"If the borrower is really in trouble, [the lenders] probably don't want to do the modification, because they think there's a good chance the borrower will redefault, and they will do a lot of work and they won't collect money," said Paul Willen, an economist with the Boston Federal Reserve who has studied bank foreclosures and modifications.

"The problem with this is in some deep sense, you can't penalize the banks for acting in self-interest. It's a for-profit business."

Others are critical of the voluntary nature of the program and the Obama administration's hands-off relationship with lenders.

The Treasury Department official charged with overseeing the program insists it's "off to a strong start, with hundreds of thousands of trial modifications already underway."

Assistant Secretary for Financial Institutions Michael Barr acknowledges that "servicer performance has been uneven, but servicers have committed to ramping up efforts to improve the process for borrowers," and he insists that "the administration will hold these institutions accountable for their progress."

He says Treasury is on track to help 3 million to 4 million homeowners in three years.

Diane Thompson of the National Consumer Law Center has a theory on why the Obama administration isn't getting tougher with the banks: "This is a voluntary program. I think Treasury has been very concerned to make sure that servicers [the banks] are willing to participate."

She's convinced that banks will improve their track record only if they're forced to make loans.

"Until it's made a mandatory program, I think we will not see a significant drop in foreclosures," Thompson said.

Another problem with the program is that banks don't always have the final say.

Many of these mortgages are held by private investors, and the bank simply acts as a middleman. If investors think they can make more money by foreclosing than modifying the loan, experts say the bank is powerless to override that decision.

Willen adds: "What's upsetting about this is that with Making Home Affordable, what you ended up with may be worse [than doing nothing]. We're giving more money to banks, and not preventing many foreclosures."

The Treasury Department has begun stepping up pressure on banks. This month, it began publicly reporting the number of the program's loans the banks had offered, as a way to shame banks into better participation rates.

Both banks say that those numbers are misleading -- that they have many more offers in the pipeline and have increased staffing.

Bank of America also says it is bigger than other banks, so it has more applicants to process. Wells Fargo also says that it has refinanced many hundreds of thousands of loans outside of the government program.

Courson said many other banks are also offering their own mortgage modification programs, and if you count those, "a million and a half borrowers were assisted in the first six months in this year."

Multiple administration officials insist to CNN that there is adequate oversight of the program and that the Treasury Department has enlisted Freddie Mac to monitor the banks.

A Freddie Mac official, who would speak only on the condition of anonymity because it is acting "at the direction of Treasury," told CNN that its investigators visit banks, but only after giving the banks' management notice that they're coming.

The agency reviews loan documents, but only those that lenders provide. There are no surprise visits, no tape recordings of bank calls to assure quality assurance, and no way to respond to individual homeowner complaints.

Recently, Freddie Mac began random reviews of cases in which homeowners were denied Making Home Affordable loans. So far, Freddie Mac has not found a single instance of noncompliance worth referring to the Treasury Department for a penalty.

The Treasury Department was unable to show CNN any instance of a lender being penalized for breaking the program's rules.

All About Foreclosures • Mortgage Bankers Association • U.S. Department of the Treasury