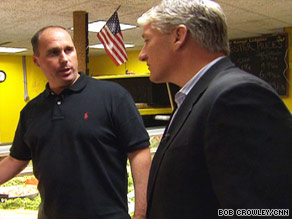 Joe Ray, left, says the cost of providing full-time workers with health care is worth it.

PORTLAND, Maine (CNN) -- Joe Ray has no complaints about the economy but plenty of worries about what he sees and hears in Washington.

His company, Free Range Fish & Lobster, processes 8 million pounds of fish a year, plus shellfish and lobsters. A recession means restaurant sales are down some, but that decline is more than offset by the surge in people looking for seafood as they eat more meals at home.

"We're up about 30 percent," Ray said during a tour of the operation along the Portland waterfront.

He says the cost of providing full-time workers with health care is expensive but worth it.

"To keep good employees," he said. "So you don't have to keep changing the flow of people that are coming in and out. It costs money to do that, too."

But when it comes to the debate over national health care reform, Ray sees the price as out of line with what the country can afford right now.

"I think I'd rather just be left alone," Ray said. "Just pay my bill and try to deal with it that way."

"It is just a crazy system, and it needs to be fixed," said Hogan, a retired attorney who held a party at his Kennebunkport home Wednesday evening to watch Obama's speech to Congress.

He posted notice of his viewing party on the Obama political organization Web site but in the end watched the speech with a half-dozen friends and neighbors. No strangers signed up, as was common at such events during the Web-driven Obama presidential campaign.

"State of the Union"

"I think it is much harder to get people involved in an issue," Hogan said. "I think there are lots of people who will get involved every two years or every four years and will talk to their neighbors for elections."

Maine is an interesting stage in the health care debate for a number of reasons. Consider just these two:

• The decline in support for Obama's handling of health care has been pronounced among Americans who consider themselves political independents, and in Maine, nearly four out of every 10 voters is "unenrolled" or independent of any political party.

In the latest CNN polling, for example, 45 percent of all Americans disapproved of how Obama is handling his job as president. Among independents, his disapproval rating was 53 percent.

• Maine's two U.S. senators, Olympia Snowe and Susan Collins, are among the handful of realistic Republican targets as the White House tries to get at least modest GOP support. Snowe, in particular, has a crucial voice at the moment because of her seat on the Senate Finance Committee.

We visited Snowe's Portland office the morning after the president's speech, and it was clear that she was getting mixed advice.

"No gov't h c.," an office worker scribbled on a legal pad as she took one of the dozens of morning calls.

"Supp Publ Opt," is another notation made during a call a few minutes later, shorthand for supporting the public option that Obama and most Democrats would prefer to compete with private insurers.

Snowe is skeptical of the public option and has been trying to negotiate an alternative with the White House and colleagues on the Finance Committee. Collins, usually described as slightly more conservative than Snowe, is even more skeptical of such an expanded government role.

In the end, though, those who know the state's independent politics well say that both senators have a lot of leeway despite the high stakes and high emotions of the health care debate.

"Generally, what people in Maine vote for is what works" is how Angus King, who was elected to two terms as governor as an independent, describes the state's less ideological politics. "I would call it pragmatism. ... They seem more interested in getting things done than necessarily lining up in a partisan way."

Speaking specifically of Snowe and her prominent role at the moment in health care talks, King said, "She is the winningest politician in Maine history. She is enormously popular, and I think she can do whatever she wants."

The former governor says that because independents are by definition a varied group, he sees no one reason Obama's standing among these voters on the health care issue has dropped. For some it is probably worries about the costs; others perhaps are disappointed the president has not had more early success delivering on his promise to change Washington.

"I think people are going to say, 'OK, what's working and what's happening down there?' " said King, an Obama supporter. "This health care thing is very important. Not only important substantively but symbolically.

"Can he lead? Can he put something across the line? Is he tough enough?"