Henry: Is Obama's Nobel a blessing or curse?

WASHINGTON (CNN) -- Yes he can win the Nobel Peace Prize. Even on the same day that President Obama met with his war council yet again to consider sending up to 40,000 more U.S. troops to Afghanistan. 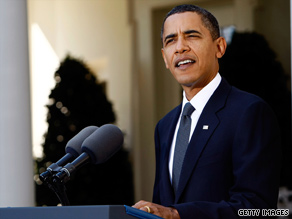 The confluence of events -- some might even call it irony -- was a stark reminder that this award was more about the promise of change than actual change. Peace is not at hand in Iraq or Afghanistan, and while the president has articulated a new approach to the world it will be difficult to translate that vision into some actual victories.

"Even as we strive to seek a world in which conflicts are resolved peacefully and prosperity is widely shared, we have to confront the world as we know it today," Obama said in the White House Rose Garden. "I am the commander in chief of a country that's responsible for ending a war and working in another theater to confront a ruthless adversary that directly threatens the American people and our allies."

Let me be clear that I don't buy into any of this silliness from some pundits about how winning such a prestigious honor could backfire on Obama. Becoming only the fourth U.S. president to ever win the Nobel can hardly be spun into a negative.

But it's important to note that the award does not create one job in the U.S. economy. It does not provide one Republican vote on Capitol Hill for the president's health care push. And the challenges are clearly not just on the domestic front.

With the Norwegian Nobel committee citing the president's "extraordinary efforts to strengthen international diplomacy and cooperation between peoples," one top Obama adviser told me this is an affirmation of the administration's aggressive efforts to reach out across the world. But this adviser quickly acknowledged the hard work of trying to turn that dialogue into actual progress on difficult problems like forging Israeli-Palestinian peace.

And I think this award puts new pressure on the president from the right and left. Conservatives like CNN contributor Ed Rollins was quick to charge the honor will only highlight the fact that the president has few achievements to point to yet. "I think certainly you have to give him an 'A' for trying," he said. "But at the end of the day, what has he accomplished?"

I think you can also see liberals like Sen. Russ Feingold, D-Wisconsin, who has been pushing Obama for a timetable to withdraw U.S. troops from Afghanistan being emboldened. Why wouldn't Feingold now say something to the effect of, "Mr. Peacemaker, why are you potentially further escalating the war in Afghanistan?"

Nevertheless, this is a sweet moment for the president. What's striking to me is that exactly one week ago I was in Copenhagen, Denmark, where the president swooped in for a few hours to push Chicago's Olympic bid. Once he lost, the dramatic defeat led many -- including me -- to report that this was obviously a blow on the international stage.

That's why when the news about the Nobel Peace Prize landed like a lightning bolt in the wee hours of Friday morning, White House aides were ecstatic. As I rushed to get some reaction, I finally reached Chief of Staff Rahm Emanuel by telephone and he was quick with a quip.

"It's clear Oslo beats Copenhagen any day of the week," Emanuel told me.

He stressed that he was joking. But there was also a measure of vindication in his voice.