WASHINGTON (CNN) -- Sen. John McCain said any added military deployment in Afghanistan smaller than the 40,000 troops reportedly requested by the top U.S. commander there "would be an error of historic proportions." 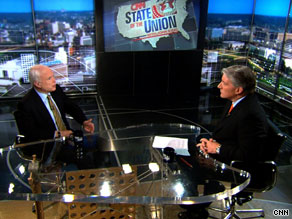 Asked whether he thought the war in Afghanistan could be won with fewer troops than Gen. Stanley McChrystal has reportedly requested, McCain said, "I do not."

The Arizona Republican, who was defeated by President Obama in the 2008 presidential election, spoke in a wide-ranging interview that aired Sunday on CNN's "State of the Union."

"I think the great danger now is a half-measure, sort of a -- you know, try to please all ends of the political spectrum," McCain told CNN chief national correspondent John King. "And, again, I have great sympathy for the president, making the toughest decisions that presidents have to make, but I think he needs to use deliberate speed."

Disregarding requirements that have been "laid out and agreed to" by Central Command head Gen. David Petraeus and Joint Chiefs of Staff Chairman Adm. Michael Mullen "would be an error of historic proportions," McCain said when asked whether 10,000 or 20,000 additional troops in Afghanistan would suffice.

Also Sunday, Sen. Dianne Feinstein, head of the Senate Intelligence Committee, said U.S. troops would be put in "jeopardy" if Obama does not listen to McChrystal.

"I don't know how you put somebody in who's as crackerjack as Gen. McChrystal, who gives the president very solid recommendations, and not take those recommendations if you're not going to pull out," the California Democrat said on ABC's "This Week."

Feinstein was one of many members of Congress who discussed the situation in Afghanistan with Obama last week. Speaking on "Fox News Sunday," she called on Obama to make a decision "sooner, rather than later." That's a turnaround from her position two weeks ago when she expressed support for Obama's wait-and-see approach on Afghanistan.

The president and his top military, national security and foreign policy advisers are in the midst of an intensive strategic review of the U.S. military presence in Afghanistan. McChrystal is advocating a counterinsurgency strategy similar to the so-called "surge" in Iraq -- which McCain championed. Vice President Joe Biden is advocating a counterterrorism strategy focused more on using drone aircraft and special forces to rid Afghanistan of al Qaeda militants along the Pakistan border.

As Obama continued a planned series of meetings with his war council, last week a remote U.S. outpost in Afghanistan was attacked by hundreds of insurgents, leading to the deaths of eight Americans during the single incident. The fierce firefight has become part of the ongoing debate about how many troops are necessary to accomplish the United States' goals in the country.

"Adm. Mullen and Gen. McChrystal and Gen. Petraeus have said the situation is deteriorating. Just over the last several days, as you know, week or so, we've lost 10 more brave young Americans. And the longer we delay the decision, the longer it will be before we provide them with what the needed resources are," McCain said on "State of the Union."

And pointing to the successful "surge" in Iraq that involved a broad, troop-intensive counterinsurgency strategy, in which Petraeus and McChrystal both played roles, McCain suggested that rather than delay, the president should follow the strategic advice that the two generals have already set out.

"The strategy that was developed by Gen. Petraeus in particular, but also with Gen. McChrystal as his strong right arm, did succeed there [in Iraq]," McCain told King. "Should we risk going against the advice and counsel of our best and strongest advisers, those we've given the responsibility? ... This is a very tough decision, but I do again argue for some deliberate speed, because our allies in the region are beginning to get the impression that perhaps we are wavering."

McCain also weighed in on Friday's surprise announcement that Obama has been awarded the 2009 Nobel Peace Prize. "I can't divine all their intentions," McCain said of the Nobel Committee that awards the prestigious international honor, "but I think part of their decision-making was expectations. And I'm sure the president understands that he now has even more to live up to."

On the domestic front, McCain said his party needs to be prepared for the next phase of the health care reform debate, likely to begin as soon as the last of five reform bills is put to an expected vote Tuesday in the Senate Finance Committee.

"We Republicans need to come up with our agenda, and we need to do it so that there is a viable alternative to this [legislation in the Senate Finance Committee]. And it has to do with things that are not associated with government-controlled health care in America.

"And there are many, many things we can do -- medical malpractice reform, go across state lines to get insurance policies of your choice, refundable tax credits -- there's a long list of things that we can and should propose as we enter this debate."

As the release date approaches for his former running mate's new book, "Going Rogue: An American Life," McCain openly admitted that there were tensions between his former campaign manager Steve Schmidt and those close to former Alaska Gov. Sarah Palin.

Still, McCain called Palin "a formidable force" in the GOP and said he remains open to the possibility of Palin being his party's presidential nominee in 2012. "I have great affection for her," McCain continued. But "did we always agree on everything in the past? Will we in the future? No."

While McCain said he could not predict what would happen in the next presidential election, the Arizona Republican said he is open to many potential nominees for his party -- including Palin.