WASHINGTON (CNN) -- The White House said it had no comment Monday in response to the upcoming release of a new Michelle Obama action-figure doll. 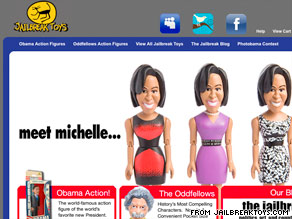 The Michelle Obama doll is available in three outfits, all of which show off her trademark bare arms.

The 6-inch doll is made by New York toymaker Jailbreak Toys and is set for release on November 20, but the company began work on the new product six or seven months ago, according to Jason Feinberg, Jailbreak Toys' 32-year-old founder.

"The entire political scene was a little rosier at the time," Feinberg said in a phone interview, "But what was really apparent was the country, and really the world at large, were very enamored of this lady."

Feinberg, whose company began selling a Barack Obama action-figure doll in mid-2008, said that Michelle Obama's "energy" was "muted, subdued, classy" coming out of last year's campaign while her husband's image was much more like that of a superhero.

The new Michelle Obama doll is available in three outfits: the purple dress worn when the Obamas shared their famous fist bump during the campaign, the red and black dress she wore on Election Night and the black-and-white floral dress she wore during an appearance on "The View." All three dolls show Michelle Obama in a sheath dress and with bare arms, attributes that have become personal trademarks during her tenure as first lady.

Feinberg said his target audience for the new doll is not children but adults "who collected toys as a child, who haven't lost that kind of whimsical enthusiasm."

Like Jailbreak's Barack Obama doll, the new Michelle Obama doll will retail for $12.99, according to Feinberg. Katie McCormick Lelyveld, a spokeswoman for the first lady, said in an e-mail to CNN that the White House had no comment on the new doll.

When the company behind Beanie Babies began selling dolls named "Marvelous Malia and Sweet Sasha" soon after Inauguration Day, the White House had a swift and strong reaction. "We feel it is inappropriate to use young private citizens for marketing purposes," the first lady's spokeswoman said at the time.