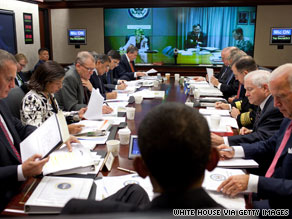 President Obama and his national security team meet in the White House Situation Room on Wednesday.

The meeting, the fifth such gathering in recent weeks, came as the administration continued to weigh a call for as many as 40,000 additional troops in Afghanistan from Gen. Stanley McChrystal, the top U.S. commander in that country.

McChrystal has said the extra manpower is necessary to implement an effective counterinsurgency strategy.

While McChrystal is pushing for a major troop increase, others in the administration are advocating a different approach. Vice President Joe Biden has called for a counterterrorism strategy, which would focus on using special forces and technology to reduce the number of al Qaeda insurgents on the Afghanistan-Pakistan border.

"I will tell you that our principal goal remains to root out al Qaeda and its extremist allies that can launch attacks against the United States or its allies," Obama said Tuesday.

"That's our principal mission. We are also obviously interested in stability in the region, and that includes not only Afghanistan but also Pakistan."

Obama has come under intense pressure from several leading senators to follow McChrystal's recommendation, a move vehemently opposed by many liberal Democrats.

As Obama huddled with his national security team, House Majority Leader Steny Hoyer, D-Maryland, said he's not ready yet to support sending additional troops to Afghanistan. Hoyer also told reporters he has serious questions about U.S. chances for success in the region and the stability of the Afghan government.

"Afghanistan has not been a successful venue for many great powers in the past," Hoyer said. "I can't think of any. I think we also need to have some degree of confidence that the government in Afghanistan is a viable government that can create confidence within its people. I have reservations about whether that has happened at this point in time."

The majority leader also argued that the situation in Afghanistan can't be viewed in isolation and requires a regional approach that includes Pakistan and India.

Sen. John McCain, R-Arizona, said Sunday that any added military deployment that fell short of McChrystal's request "would be an error of historic proportions."

"And I think the great danger now is a half-measure, sort of a -- you know, [trying] to please all ends of the political spectrum," McCain told CNN's John King.

"I have great sympathy for the president, making the toughest decisions that presidents have to make, but I think he needs to use deliberate speed," he said.

Sen. Dianne Feinstein, D-California, argued that U.S. troops would be put in "jeopardy" if Obama does not listen to McChrystal.

"I don't know how you put somebody in who's as crackerjack as Gen. McChrystal, who gives the president very solid recommendations, and not take those recommendations if you're not going to pull out," she said Sunday on ABC's "This Week."

British Prime Minister Gordon Brown announced Wednesday that he is increasing British troop levels in Afghanistan to 9,500, an increase of 500.

The British have the second-largest contingent in Afghanistan, after the United States, according to NATO's International Security Assistance Force.

Obama announced a plan to send 21,000 additional troops to Afghanistan in March. A total of 65,000 U.S. soldiers are currently serving in the war-torn country.

CNN's Richard Greene and Adam Levine contributed to this report.