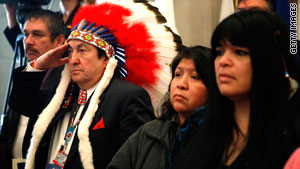 "You deserve to have a voice," Obama told representatives of 386 tribes at a White House Tribal Nations Conference. "You will not be forgotten as long as I'm in this White House."

Leaders of all 564 federally recognized tribes were invited to the daylong meeting.

Interior Minister Ken Salazar and other Cabinet members participated in the conference, which focused on the challenges and priorities of the tribal leaders and their people.

Obama acknowledged misdeeds by the U.S. government in dealing with Native Americans.

"We know the history that we share," Obama said. "It's a history marked by violence and disease and deprivation. Treaties were violated. Promises were broken. You were told your lands, your religion, your cultures, your languages were not yours to keep."

In addition, he said, the federal government failed to properly consult Native American leaders and communities on what they needed, leading to current conditions that include unemployment up to 80 percent on some reservations, roughly 25 percent of Native Americans living in poverty and more than 10 percent of reservation homes lacking electricity or safe water supplies.

During a question-and-answer session with conference participants, the tribal chiefs welcomed Obama and thanked him for his leadership, with many asking for his help on problems facing their people.

Bill Martin, president of the Tlingit-Haida Indian tribes of Alaska, noted that the suicide rate for Native American men between 15 and 27 years old in the state was 12 times the national average.

"It's a serious issue, and we hope that we can be able to provide more funding to combat suicide," Martin said.

Others asked for help on securing land rights, improving education and other social issues.

"I want to give you my solemn guarantee that this is not the end of the process but the beginning of the process and that we are going to follow up," Obama said to applause in his closing remarks to the conference. "We are going to keep on working with you to make sure that the first Americans get the best possible chances in life."