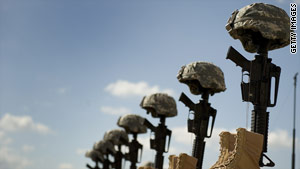 Washington (CNN) -- Military victims of the Fort Hood massacre will be eligible to receive the Purple Heart if Congress passes a bill introduced Tuesday.

Nonmilitary victims could receive the Secretary of Defense Medal for the Defense of Freedom, the civilian equivalent of the Purple Heart. Both military and civilian personnel killed or wounded in the November 5 attack would be granted the same legal status as combatant casualties in Afghanistan and Iraq.

The bill was introduced by Rep. John Carter, R-Texas, who represents the district that includes Fort Hood Army Post in the House of Representatives.

"As far as I'm concerned, this was an attack by an enemy upon American troops on American soil," Carter said Tuesday at a Capitol Hill news conference.

The bill "is about giving soldiers the benefits that other soldiers get when they are unfortunate enough to be killed or wounded in a combat zone."

Granting combatant status also would guarantee that beneficiaries of military service members killed in the attack can receive the maximum life insurance benefit, according to Carter's office.

Hasan, who was seriously wounded in the incident, has been charged with 13 counts of premeditated murder, charges that make him eligible for the death penalty.

In the wake of the shootings, Defense Secretary Robert Gates and Adm. Michael Mullen, chairman of the Joint Chiefs of Staff, are expected to order a sweeping look of how the U.S. military can spot and deal with potential problems ranging from behavioral issues to security, a senior U.S. military official told CNN. Two other Pentagon officials confirmed a plan is being formulated for a review, but final details of the investigation's focus remain to be worked out.

It's not clear who would conduct the Pentagon review. Officials said one possibility is that retired high-ranking officers would be asked to take charge of a panel of outside experts and perhaps military and civilian authorities. The Army has already begun its own service-wide review, collecting information to begin a "hard look" at how to avoid incidents like Fort Hood, according to Gen. Peter Chiarelli, Army vice chief of staff.

The Purple Heart is bestowed upon a service member or U.S. civilian serving under the military's authority who "has been wounded, killed, or who has died or may hereafter die of wounds received" while in action against an enemy or in a terrorist attack, according to the Pentagon's Manual of Military Awards.

It was created by Gen. George Washington in 1782, who then called it the "Badge of Military Merit," the manual says. It was not used after the Revolutionary War, however, until it was revived in 1932, after Washington's order establishing the award was discovered among his papers, according to the Web site of the Military Order of the Purple Heart.