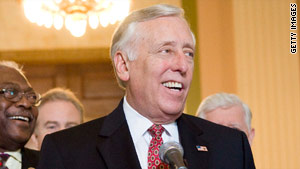 House Majority Leader Steny Hoyer has not said how much the jobs bill will cost.
STORY HIGHLIGHTS

Washington (CNN) -- A top House Democrat told reporters Tuesday that Congressional Democrats are moving ahead with plans to vote before the Christmas holidays on legislation that would create more jobs.

Hoyer said Democratic leaders are still deciding what components to include in the new jobs bill, but pledged they were on track to pass legislation before Congress breaks for the year.

Several measures are under discussion, including additional unemployment assistance, extension of temporary health care coverage for those out of work, assistance for cash-strapped states, and tax credits for employers who hire new workers.

Video: Pump up your income

Hoyer also indicated that another federal infusion of money to build roads and bridges, a major component of the stimulus bill enacted in February, is likely to be a major focus.

But Hoyer said the bill was not a so-called "second stimulus," because it would be more targeted than the $787 billion federal spending measure that is still being distributed for a wide range of projects around the country.

The Maryland Democrat did not specify how much money would be needed or how long a period the legislation would cover. "It's clear that we need to act in a way that does get to the creation of job opportunities for people in the short term," he said.

But Cantor, who led the unanimous House GOP vote against President Obama's stimulus package in February, questioned how serious Democrats are now about moving a bill targeted at job growth.

"We say it's about time. I say, you gotta be kidding me. They have for months now been about more spending, leaving a wake of deficits in their trail, and now they want to focus on what's important," Cantor said.

Cantor said he hoped Speaker Nancy Pelosi would include some of the GOP proposals, which focus primarily on business tax breaks, aimed at reinvigorating the sluggish economy,.