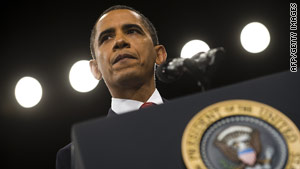 (CNN) -- Barack Obama was viewed as the anti-war candidate for the White House and then won the Nobel Peace Prize as president. Now he'll triple the size of the American force in Afghanistan that he inherited less than a year ago.

It's not a complete surprise. In his presidential campaign Obama strongly opposed the war in (start italics) Iraq (end italics) precisely because he said it was a dangerous distraction from the fight against terrorists in Afghanistan. He pledged to refocus American efforts there and he's spent months considering how.

He's appealing to other nations fighting alongside the U.S. to increase their commitment, beyond the 45,000 troops they have there. And of course, he has to convince his own people too, to support the bigger conflict and the casualties ahead.

Match the numbers to political affiliation and only 17 percent of Obama's own Democrats favored a bigger deployment.

Maybe that's why one of Obama's top generals said the president's speech reflected a dilemma.

"I think you heard some tension... understandable, between the desire to win the war," said General David Petraeus Wednesday, "and that is to end the war."

"The president has inherited a god awful mess and has no good options available," said Democratic Congressman Dave Obey Tuesday.

"I hope his policy succeeds, and I know our troops - who have sacrificed so much already - will give everything they've got to make it work, but there are huge obstacles that stand in the way."

Obama has a big fight ahead in Afghanistan -- and a battle at home to win too.