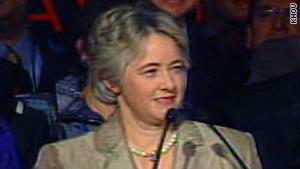 Parker, who served five years as city controller, beat former city attorney Gene Locke with 53.6 percent of the vote in a runoff election.

Both are Democrats who faced off for the second time because neither emerged with more than 50 percent of the vote in the November 3 election.

Parker's election also makes her the second woman to become mayor of Houston. Other cities such as Providence, Rhode Island, and Portland, Oregon, have picked openly gay mayors. Houston is the fourth-largest U.S. city.

Parker's victory is also remarkable because a few years ago, Houston rejected a referendum to offer benefits to same-sex partners of city workers. Also, the city sits in a state where gay marriage is against the law.

"Houston is a multiracial, multicultural, international city. And I think my election will send a message to the world that Houston is a city that might surprise a lot of folks," Parker said before the runoff.

Parker, 53, has never shied away from, nor made an issue of, her sexual orientation. She has been with her partner for 19 years and they have two adopted children.

She was elected to the city council and then spent the past five years as city controller. She ran for mayor on a platform of fiscal conservatism.

"I have always stood up for the fact that I am gay. It's part of the resume that I bring to the table, but it's just a piece of the package," she said.

After the mayoral race entered a runoff, conservatives and anti-gay activists mounted an intense campaign against Parker. Houston residents received flyers in the mail that highlighted Parker's support from gay groups and her relationship with her partner.

"I think it's a small and shrinking minority of Houstonians who have that attitude and I look forward to it as being mayor of all of Houston," she said.

Parker will take office in January, replacing Bill White who could not run because of term limits.

CNN's Ed Lavendera and Don Lemon contributed to this report.