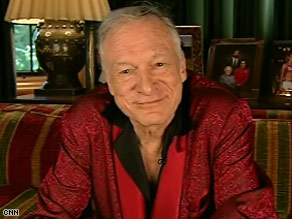 Hugh Hefner, 82, says that "staying young is what it is all about for me."

Hugh Hefner: It is my pleasure.

Roberts: You have over the decades certainly supported political causes, you've supported Democratic causes. I'm wondering what your thoughts are regarding the pending inauguration of Barack Obama and where you think the country is headed in the next four years.

Hefner: Well, where the country is headed is obviously a question we would all like to know. But I, certainly, [say] this [is] a time for a change. I supported Obama. I'm delighted that I lived to see a black president. I think he's a very good man. I think we've had ... eight of the worst years in my memory. And we hope that Obama can make some difference.

Watch the interview with Hugh Hefner »

Roberts: You know in the 1950s and through the '60s and the early '70s you were such a factor in the sexual revolution in this country. With the election of Barack Obama, do you believe that the cultural revolution has come to an end?

Hefner: It's always ongoing. You know, we remain essentially a puritan people. And so I think that conflict is always there. One got a remarkable revolutionary change in pop culture and in moral values in the '60s and '70s, and then there was a backlash. And that backlash, I think, has influenced government. And, um, the Christian right has had, played a major role in all of that. And I think that the complicated problems with religion being involved with politics hopefully will come to an end for a while at least.

Roberts: Now in 1953, when you first launched Playboy magazine, you seemed to be the right publication for the right time. I know that you were very heavily influenced by the Kinsey Report, which had come out not too long prior to that. But 55 years later, is Playboy magazine still relevant? And if it is, how do you keep it relevant?

Hefner: Well, I don't think obviously it will ever play the same kind of role that it played back in the 1950s and '60s. But I do think that a magazine of quality always has a place. Increasingly, obviously fewer people are reading magazines and fewer people are reading newspapers and books, but I think that part of that is a change that Playboy is always, is also embracing. We're very much involved with the Internet. We were the first magazine to use [the] Internet and have our own Web site. So I think that we'll continue to publish and publish both the magazine and then publish through electronics.

Roberts: The new Steven Watts biography is a fascinating, very fascinating look at your entire career, from your roots all the way up until the present. And he says, looking back over it, that "the key to his approach was that he edited Playboy for himself. Aiming it at his own tastes and values." Was that also a key to your success as well that you approached this with such a personal passion?

Roberts: Now this, of course, has been a family enterprise. You founded the magazine, your daughter Christie took over as CEO of the company in 1982. She has been there for 26 years, but she's stepping down later on this month. Will you be able to still maintain that same - I don't want to say "quality" because I'm sure the quality was there -- but can the business continue in the fashion it has for the past 55 years?

Hefner: Well, only time will tell. If you're talking in terms of family connections, I have two teenage sons. As a matter fact, there was an interview with Marston and Cooper in the current January issue.

Roberts: I saw it.

Hefner: Marston has just turned 18 and is at Trinity College. Cooper will be graduating in June and will be going to USC, and both have an interest in the magazine.

Roberts: So you'll be able to continue that legacy into the future?

Hefner: That is my hope.

Roberts: Hugh, in the early part of the 1980s you ran into a number of problems. You were attacked on a number of different fronts by Reagan conservatives, the feminist movement, business started to suffer. Of course, there was the murder of 1980 Playmate of the Year Dorothy Stratten and charges that you had exploited her. A recent article in the Baltimore Sun described those times this way. It said:

"Many now viewed Hefner as an anachronism: A creepy old guy padding around the mansion in slippers, pajamas and smoking jacket, pathetically cavorting with the same young bimbos and living the dissolute life of an aging Lothario -- the sexualized Peter Pan who refused to grow up."

How did you overcome all that and survive another 25 years in the way that you have?

Hefner: Well, I think that's probably the great question. One of the big questions is "Why is the brand so hugely popular again?" There was a period in the '80s and '90s on which we were in the shade, and the brand has become hugely popular again. Part of it because of the television show. The television show is a global phenomenon. And what is unique about it is the fact that it is more popular with women than with men.

Roberts: I know. The program you are talking about is girls gone wild ... sorry, "Girls Next Door." It's heading into its sixth season. And one of the statistics I saw is that 78 percent of the viewers are women. How do you think you've tapped into that market?

Hefner: Well, we certainly didn't anticipate it. The original notion of doing the show through the eyes of the girlfriends seemed inspired because it took a lot of the pressure off of me. Because I'm a very busy guy. I still am very busy involved with the business and with the magazine. So the notion of doing a reality show through the eyes of the girls was a good idea because it took the pressure off the old man.

What we didn't anticipate, of course, was as a result ... it is a hugely popular phenomenon with women and that, of course, is really welcome. Because we knew that we were going to have the guys so the fact that the magazine and the brand is now hot with young women bodes well for the future.

Roberts: Of course, the three principals in "Girls Next Door" are Holly, Bridget and Kendra, and we know that there has been a bit of a change in the relationship between you and Holly, at the very least. Will they be back again next year for the next season?

Hefner: Yes, all three of the girls are scheduled for season six. It will be a season of transitions and we will be meeting some of the new girls, too.

Roberts: You're 82 years old now? Your latest girlfriends are a pair of 19-year-old twins, Karissa and Kristina Shannon. You are 63 years older than they are. A lot of people would say, "How do you do it?" And other people might say, "Are you ever going to grow up?"

Hefner: Well, I'm never going to grow up. Staying young is what it is all about for me. Holding on to the boy and, um, long ago I decided that age really didn't matter and as long as the ladies ... feel the same way, that's fine with me.

Roberts: Well, you're definitely the youngest 82-year-old I've ever seen. Hugh Hefner, thanks for being with us today.