(CNN) -- A Grammy-nominated classical pianist who wears personalized trainers, Lang Lang is one-of-a-kind in the world of classical music. 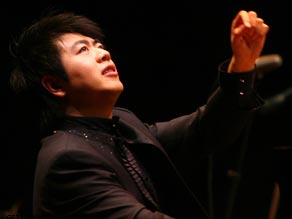 His expressive and flamboyant style has so far brought him more fans than critics.

The 26-year-old has become a sensation in the music world, with a prodigious talent that catapulted him from a childhood in northeastern China to playing to a packed Carnegie Hall by the age of 21.

His flamboyant playing style and bold image has divided critics, but also attracted millions -- who might normally be more into MTV than Mozart -- to classical music.

Lang Lang's parents were instrumental in pushing him to be a world-famous artist. At the age of 9, Lang Lang gained a place at the Central Music Conservatory, moving with his father to Beijing, where he faced some of the toughest moments in his young life.

"The biggest challenge for me is that I was not living with my mom. This is really awful because... I've been always very close with my mom when I was a kid. Even till today, you know, we're still very close," he told CNN.

Tough times were compounded when his teacher took a dislike to him. Far from encouraging the young pianist, she consistently told him he had no talent, and after six months kicked him out of the school.

Being so far from his mother, he found little support at the time from his father, with whom Lang Lang admits to having a difficult relationship as a child.

"When I was a kid I didn't talk to my father so much. I didn't know who to talk to when I'm facing very challenging situations. And that was really driving me crazy," he said.

He experienced a harrowing moment when, in a violent outburst, his father accused him of ruining his dream of Lang Lang becoming a great pianist, saying he was no good and should throw himself out of their tenement building.

"I don't want to become a pianist at that moment, I hate piano, I hate my father, I hate everything that brings me to being a pianist," he said. "I never forgive [my father] for a long time, but it is like now I understand, you know he quit his job and he went to Beijing with me."

He also managed to forgive his former piano teacher, and had the satisfaction of performing a master class at his former school and collecting an honorary professorship in 2006.

It took Lang Lang a long time to play the piano again in front of his father, but his love for playing returned. His talent and competitive spirit won him the International Tchaikovsky Competition for young musicians at just 13.

"I only knew that competition is the only way to become famous as a Chinese person growing up in China. That's the education you get, competitions," he said.

It brought him wider attention and, at the age of 14, a move to Philadelphia to study at the Curtis Institute of Music.

His big break came when he was 17, appearing with the Chicago Symphony as a last-minute replacement. Just four years later, his solo recital at Carnegie Hall was sold out.

Since then, the 26-year-old has played with some of the world's most esteemed orchestras and conductors -- Daniel Barenboim described his playing style as "like a cat with 11 fingers" -- and his youth, rich talent and flamboyant style has attracted a new audience to classical music.

Appearing at the opening ceremony of the Beijing Olympic Games was a highlight among notable achievements.

"It was really incredible when you're playing in the middle of the stage; it feels like you're playing in the middle of the universe. You do the Olympic Games in the city which has most of the feeling for you, everything: disappointment, victory, tragic moments, really sad moment, but happy moment, and satisfied. It's a city that for me has everything and that what made me extremely emotional," he said.

However, not all the reviewers and critics have warmed to his style or image. Some have nicknamed him "Bang Bang," while American pianist Earl Wild dismissed Lang Lang as the "J.Lo of the piano" in an article in the New Yorker.

While admitting he has created something of a brand of himself, Lang Lang is happy that he gains more plaudits from his contemporaries than negative reviews, and that he's able to help inspire others to take up music.

An estimated 40 million children in China are learning the piano because of the "Lang Lang effect." While performing around 130 concerts a year, he also manages to find time in his packed schedule to be a UNICEF ambassador and work with the Montblanc Cultural Foundation.

"You need to be putting all the efforts into something you think is a priority. What I believe, this charity work is my priority... I would like to give back to the world something that I get from other people," he said.