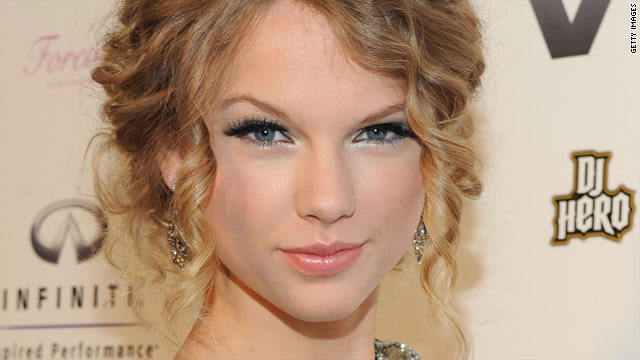 Taylor Swift has had quite a year, and will end it as one of People's "25 Most Intriguing of 2009."
STORY HIGHLIGHTS
RELATED TOPICS

(CNN) -- There have been enough celebrity scandals and surprises in 2009 to last a lifetime, but the year has been undoubtedly good to Taylor Swift, who will close it out as one of People magazine's "25 Most Intriguing of 2009."

Swift, who has had a string of successes in spite of one memorable awards show snafu, will grace the cover of People magazine's double issue that breaks down pop culture's best and worst moments of the year and the decade.

Named "The Golden Girl" by People, Swift went from country singer to superstar with the year's best-selling album, "Fearless," a slew of awards, eight Grammy nominations and sold-out shows on her nationwide tour.

Her rise to the top "feels like this ongoing dream," she told People in an interview. "It blows my mind."

Despite having more than enough reasons to boast, Swift said she prefers to stay grounded.

"You can stay the same person, even if everything around you changes," she said in the interview. "I would like to think everybody out there isn't just waiting for me to trip and fall and stumble out of a club drunk. People know I'm not a party girl."

Rihanna's resiliency after being assaulted by her former boyfriend and Lady Gaga's bottomless bag of shock value catapulted the two pop stars to People's list of most intriguing.

Gaga has reigned pop music from the top of the charts in 2009, but Susan Boyle, another one of People's most intriguing, was making hits right along with her: The British breakout went from reality show contestant to international star seemingly overnight and had a No. 1 album in the same week Rihanna, Adam Lambert and the Gaga herself released records.

Kate Gosselin, who makes People's "25 Most Intriguing" list as "the mother of all reality stars," didn't see as much success this year. Her 10-year marriage to Jon Gosselin unraveled, which was followed by the cancellation of her hit show "Jon & Kate Plus 8." Kate has pushed forward nonetheless, and appears in People magazine as the quintessential television mom, Carol Brady.

People magazine rolled three intriguing people into one with the Kardashian sisters, who've also had a whirlwind year with Khloe's surprise wedding to basketball player Lamar Odom and Kourtney becoming a mom to a baby boy.

Other celebrity surprises who made the list include Chaz Bono, who opened up about his sex change in late October, and Padma Lakshmi, who announced her pregnancy in early fall.

Of course, no year-end list of intriguing people would be complete without "Twilight" star Robert Pattinson. People magazine aptly titled the 23-year-old actor "the heartthrob," since he's one of the few who can make nearly every teenage girl -- and woman -- on the planet go weak on sight alone.

Other Hollywood notables include Brad Pitt and Angelina Jolie as "the power couple"; Mo'Nique as "the breakout star"; Sandra Bullock as the "hot shot"; and Tyler Perry as "the mogul."

To see the complete list of People's most intriguing of 2009, look for the issue on newsstands Friday.