(CNN) -- Dick Van Dyke thought Walt Disney wanted to see him about "Mary Poppins" because of his singing and dancing skills. But the legendary studio founder had something else in mind. 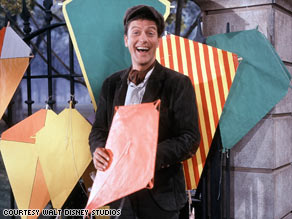 "He had heard me in an interview talking about what was happening to family entertainment," says Van Dyke in a phone interview, still amused by the memory. "I was decrying the fact that it seemed like no holds were barred anymore in entertainment. ... That's why he called me in, because I said something he agreed with."

Disney, after years of cajoling "Poppins" author P.L. Travers, was finally mounting a production of the books about a magical nanny. With Van Dyke, he knew he was also getting a star as well as a like-minded performer. The actor's TV sitcom, "The Dick Van Dyke Show," was a steady hit at the time, and he had won a Tony for his work in the stage version of "Bye Bye Birdie."

With Van Dyke as the Cockney chimney sweep Bert, fellow Tony winner Julie Andrews (in her movie debut) as Poppins and several old pros in tow, Disney went ahead with production on the 1964 film, which was to become one of the biggest hits his studio ever produced.

The movie earned five Oscars -- including a best actress win for Andrews -- and its Richard and Robert Sherman songs, such as "Supercalifragilisticexpialidocious," "Feed the Birds" and the Oscar-winning "Chim Chim Cher-ee," have become standards.

Forty-five years later, "Poppins" is also a hit stage show, with excerpts of the Broadway production featured on a new 45th-anniversary DVD. Van Dyke, 83, took a few minutes to talk about the film, his much-maligned Cockney accent and Michelle Obama's fondness for his old TV show. The following is an edited version of the interview.

CNN: Tell me about Walt Disney. People think of him as a brand name nowadays, but he was a real person and still alive when you made the film. Was he a presence on the set?

Dick Van Dyke: Absolutely. He was very much into this and believed in it. He hung around the set a lot. And I'm happy to say he was so pleased with the way it was going, as we all were.

CNN: How did you end up with the part of Bert?

Van Dyke: Well, I thought he hired me because I was such a great singer and dancer. As it turns out, he had heard me in an interview talking about what was happening to family entertainment. I was decrying the fact that it seemed like no holds were barred anymore in entertainment. ... He knew about the "Van Dyke Show," about our little sitcom, but that's why he called me in, because I said something he agreed with. And I got the part.

CNN: "The Dick Van Dyke Show" was still on at the time. Were you balancing the "Van Dyke Show" at the same time you did "Poppins," or were you on hiatus?

It always worked out pretty well. But I found myself getting up in the morning and taking off on the freeway and forgetting where in the hell I was supposed to go, and a couple times I showed up at the wrong studio.

CNN: You've taken a lot of ribbing over the years for your Cockney accent.

CNN: Did Andrews or David Tomlinson [who played Mr. Banks] mention things to you about the accent? Or did they just go with the flow?

Van Dyke: They just went with the flow! It's funny -- I was concentrating on the dancing, mostly, and they had given me a [voice] coach who turned out to be an Irishman, and his Cockney wasn't much better than mine. During the making of the picture nobody kidded me about the accent, but I sure took it afterwards. [One British poll named Van Dyke's accent the second-worst British accent ever; Van Dyke observes, however, that he was beaten out by Sean Connery's "Untouchables" performance.]

CNN: Tell me about the way the movie was shot. There were a lot of scenes with animated characters, and today those would be shot with a blue screen or computer animation.

Van Dyke: I think it's such a shame that Walt didn't live to see computer animation, because he would have had a good time with it. ... In those days it was before the blue screen. They used what was called yellow sulphur lighting -- the screen was yellow, and we worked with that all day, and by the time the day was over you couldn't see anything. ...

It was just an empty soundstage. And sometimes we didn't even have the music -- we would just dance to a click rhythm. But I think technically it holds up today just as well as anything.

CNN: Did you know what some of the animated sequences were going to be?

Van Dyke: Yes, that was in the script. But I had to go to Walt and talk him into letting me do the old [bank president]. I said, I'll do that part and I won't even charge you. So he made me do a little screen test and gave me the part. ... And he didn't pay me -- I had to donate $4,000 to his CalArts school. He was a little horse trader.

CNN: You worked with Ed Wynn in the film, and I know you're a huge fan of the old comedians. What was Wynn like?

Van Dyke: He was in his [late 70s] at the time, and not very well. He did all that "I Love to Laugh" stuff hanging from the ceiling, and it was just so hard on him, but he was a trouper. He was a sweet old guy. He had a palsy -- his head would move from side to side, kind of involuntarily. But the minute they would say "Action," it would stop. And he'd do the scene, and the minute they said "Cut," it would start in again.

CNN: Let me change gears. Michelle Obama has said that "The Dick Van Dyke Show" is one of her favorite shows.

Van Dyke: I've heard that, and I sent them a note and said, "Thank you for making me famous all over again." I call them the black Rob and Laura.

CNN: Is it nice that so much of your work has had longevity?