(Entertainment Weekly) -- With $42.2 million, the biggest opening gross thus far in 2009, "Friday the 13th" easily won the record-breaking Presidents Day weekend box office race, beating out Valentine's Day favorites "Confessions of a Shopaholic" and "He's Just Not That Into You," as well as solid holdovers "Taken" and "Coraline." (All totals listed here are according to early three-day estimates from Media by Numbers; rough figures for the four-day holiday weekend will be out tomorrow.) 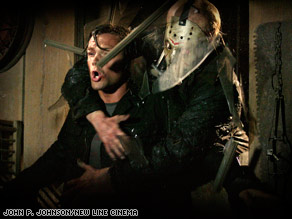 That $42.2 million sum is the top first-weekend figure for any movie in the nearly 30-year-old "Friday the 13th" series -- including the 2003 mashup, Freddy vs. Jason, which premiered with $36.4 million. In fact, the original "Friday the 13th" movie, from 1980, grossed just $39.7 million during its entire run, not adjusted for inflation.

In addition, this marks the best bow ever for a horror remake, besting "The Grudge's" $39.1 million debut gross. And it arrives despite a weak B- CinemaScore review from an audience that skewed male.

In other words, great as this first frame was for "Friday the 13th," expect a big drop next weekend.

Second place went to hearty holdover "He's Just Not That Into You," which banked an expected $19.6 million on a 29 percent drop.

"Taken" came next at No. 3, with $19.3 million in its third frame, a mere 6 percent decline from its previous outing. In three weeks, the out-of-nowhere Liam Neeson juggernaut thriller has grossed nearly $78 million.

Audiences were just not that into freshman flick "Confessions of a Shopaholic" (No. 4), however. The Jerry Bruckheimer-produced farce opened with an okay $15.4 million and drew a similarly okay CinemaScore grade of B from a crowd that was 75 percent female.

"Coraline" rounded out the top five with $15.3 million, another teensy decline of just 9 percent from last weekend. "Paul Blart: Mall Cop" (No. 6) brought its five-week sum to $110.5 million, making it the first-ever non-sequel January release to hit the century mark.

And new movie "The International" (No. 7) stumbled with just $10 million -- and a poor CinemaScore grade of C+ from mostly older men.

Overall, it was the best Presidents Day weekend ever: The total gross of all movies playing during this frame was about $190 million, which trumps the previous benchmark of $157 million in 2007 (and is up more than 38 percent from last year). No doubt, Washington and Lincoln would be proud.