Will 'Slumdog' have its day at the Oscars?

(CNN) -- The hero of "Slumdog Millionaire," a poverty-raised teaboy seeking his lost love, works his way through the questions on the game show "Who Wants to Be a Millionaire" knowing that, at any time, he can lose and walk away with nothing. 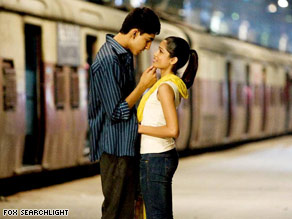 At this point, the movie appears unlikely to face the same fate.

The crowd-pleasing rags-to-riches story has been the winter's surprise winner, racking up victories at practically every juncture. The Golden Globes gave "Slumdog" its top award; so did the Producers Guild, the Writers Guild, the Directors Guild and the BAFTAs.

It doesn't hurt that "Slumdog's" production history is a rags-to-riches story as well, with the small-budgeted film caught in a downsizing at its initial American studio (the late Warner Independent Pictures, which was folded into parent Warner Bros.) and slated for straight-to-video until Fox Searchlight stepped in as U.S. distributor. From there, the honors started rolling in -- and haven't stopped yet.

Watch which films, stars are up for top honors »

"I was completely exhilarated, but with disbelief, because it's a small film with no expectations," co-director Loveleen Tandan said after the film took home the Golden Globe for best drama.

"I think that 'Slumdog Millionaire' is one of those very rare cases, where the movie comes out and you think, OK, that's a good little movie ... it will be happy to be nominated, and it will get some great recognition," said Oscar historian Steve Pond, author of "The Big Show." "And somehow it has hung on, and the bigger movies that came out afterwards did not click with people as much, and suddenly this little movie was the best story of the year."

That gives "Slumdog's" best picture competition -- "Milk," "Frost/Nixon," "The Curious Case of Benjamin Button" and "The Reader" -- a major challenge in stopping the little film's momentum. See the complete list of nominees

But "Slumdog's" "Rocky"-like success story may also provide the Oscars with something it could use for ratings domination: a rooting interest. The 81st annual Academy Awards are scheduled for Sunday night on ABC.

Oscar ratings generally have been in decline throughout this decade, and without the blockbuster "The Dark Knight" among the best picture nominees, this year may be another down year. Indeed, as Variety editor Peter Bart writes in the March issue of Vanity Fair, not even the studios -- almost all owned by major media conglomerates -- appear very engaged.

"With very few exceptions ... companies were not out there pitching their projects to Oscar and Golden Globe voters with the sort of passionate advocacy of a [Oscar-winning producer] Harvey Weinstein," wrote Bart. "To many of the top stars and agents, the Oscar, too, has become a prisoner of the bean counters."

Not even the bean counters are happy. The traditional Oscar nomination box-office bump has skipped all but "Slumdog," with grosses for "Milk" and "Frost/Nixon" down as much as 33 percent week to week. Only "Benjamin Button" has topped $100 million at the domestic box office, and its budget was estimated at $150 million. ("Slumdog" should hit the $100 million mark by early March.)

Moreover, according to The Hollywood Reporter, the accountants at ABC are dealing with a chunk of unsold commercial slots, partly thanks to the loss of the cosmetics brand L'Oreal, a perennial Oscar advertiser.

"A lot of cosmetics companies reach out to younger women, and those viewers are leaving in droves," Shari Anne Brill, senior vice president/director at the media agency Carat, told The Hollywood Reporter.

General Motors is also sitting the Oscars out after a decade of support.

The Academy Awards ceremony is trying to strike back with a new host, the multitalented Hugh Jackman, who has earned raves for his handling of the Tonys, and what producers Bill Condon and Laurence Mark hope will be a few surprises.

"Mistakes are our friends," Mark told The New York Times.

"It's in the nature of television to restrain the spontaneity of a live event," Condon added. "Things become more and more prepackaged." iReport.com: Share your Oscar acceptance speech

Both men have been coy as to what's planned -- or unplanned -- with Condon telling The Associated Press that "we wanted to restore a kind of mystery to it." But the kernel of their thinking could be inferred from a comment Mark made to the Times: "Once upon a time, if I'm not mistaken, it was a party. We'd like to bring back a little bit of party flavor."

Host Jackman is up for whatever is thrown at him.

"My acting teacher always said, 'No, don't say nervous, you're excited,' " he told Barbara Walters, according to an excerpt of an interview scheduled to air Sunday night. "And it, actually, that's the truth. I think it's, you know, I was saying to my wife, you know, it's a once-in-a-lifetime opportunity, literally it may be once."

For many of the nominees, it's also a once-in-a-lifetime opportunity. Nine of the 20 acting nominees are first-timers, and several say they're trying to enjoy the moment because it may never come again.

"It's something I never thought would happen," said Richard Jenkins, nominated for best actor for his performance in "The Visitor." "I'm terribly appreciative of this honor."

Watch Jenkins on the Oscar attention »

With "Slumdog" the odds-on favorite to win best picture, Oscar observers are focusing on the acting races for dramatic kicks. Even Nate Silver, the mastermind of the political Web site FiveThirtyEight.com, which accurately predicted Barack Obama's presidential victory in November, is getting into the act. Running this year's nominees through a sieve of Oscar history, Silver told New York magazine the favorites are Mickey Rourke ("The Wrestler"), Kate Winslet ("The Reader"), Heath Ledger ("The Dark Knight") and Taraji P. Henson ("Benjamin Button").

Ledger, who died in early 2008, could become the second performer to win an Oscar posthumously. Peter Finch won best actor for 1976's "Network" two months after he died in 1977.

A Henson win would prevent "Button," which leads all films with 13 nominations, from going home empty-handed, a distinct possibility given the way the film has been shut out so far this awards season. The record for most nominations without a win is held by 1977's "The Turning Point" and 1985's "The Color Purple," both of which went 0 for 11. iReport.com: Who will win at the Oscars?

But it's "Slumdog," which received 10 nominations, that seems destined to win the big prize. For a film about the power of fate, it can only be appropriate.

As the film approaches its conclusion, the unctuous game show host Prem Kumar, played by Anil Kapoor, asks the poor teaboy, Jamal (Dev Patel), "So, are you ready for the final question for 20 million rupees?"

"No, but maybe it's written, no?" replies Jamal, throwing an earlier line from the host back at him.

Warner Bros. is owned by Time Warner, which is the parent company of CNN.

All About Movies • Academy Awards