(Entertainment Weekly) -- After all the anticipation and hubbub, the weekend is coming to an end and the box office results are here: "Watchmen" (No. 1) grossed $55.7 million during its first frame, according to early estimates from Media by Numbers. 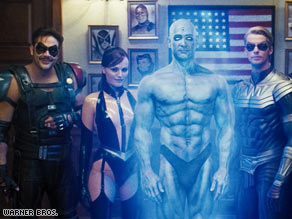 That's a solid sum, to be sure, although it's certainly on the low end of most projections. "Watchmen" premiered in more theaters (3,611) than any other R-rated movie in history, and it averaged an impressive $15,413 per venue, despite a potentially problematic long running time.

It also scored the biggest debut of 2009 so far. Nonetheless, the movie's $55.7 million take (including $5.5 million from 124 IMAX screens) is substantially smaller than the $70.9 million that 300, the last R-rated graphic-novel movie from director Zack Snyder, earned on its opening weekend two years ago.

And aside from that theater-count statistic (which almost any film could break at any time, really), there will be no major records to report on this weekend (for example, "Watchmen's" debut was just the fifth-best opening ever for an R-rated movie).

I'd argue, in fact, that this opening is a bit soft, considering the great expectations that came with Snyder's adaptation of Alan Moore's landmark comic book -- not to mention "Watchmen's" hefty grosses from screenings at midnight on Friday and throughout its first day. After attracting some major initial interest, banking $25.1 million on Friday, the film's audience dropped off dramatically during the weekend: It grossed $19 million on Saturday and is expected to bring in just $11.5 million on Sunday.

These are all big numbers, don't get me wrong, but, when combined with the fact that the film got a lukewarm CinemaScore grade of B from an audience that was largely comprised of older men, it all points to a rapid downward trend that may be difficult to reverse in the weeks to come.

Elsewhere -- yes, there were other movies playing at the multiplex this weekend! -- a number of films continued to do what "Watchmen" must now aspire to, perhaps in vain: They stayed strong deep into their long runs.

Tyler Perry's "Madea Goes to Jail" (No. 2) grossed $8.8 million on its third weekend; the film, Perry's biggest yet at the box office, has banked $76.5 million to date.

"Taken" (No. 3) also moved along like the unstoppable force it has been for more than a month now, earning $7.5 million and bringing its six-week sum to $118 million.

Meanwhile, "Jonas Brothers: The 3D Concert Experience" (No. 9) completely fell off the map, dropping a staggering 78 percent to gross just $2.8 million. According to Box Office Mojo, that's the 15th biggest second-weekend decline of all time.

Overall, the cumulative box office was up nearly 8 percent over the same frame a year ago, when 10,000 B.C. opened big, making this the fifth consecutive "up" weekend at the multiplex. So, all in all, I'd say today's was a good report, indeed.