(CNN) -- Feted by Sean Penn and applauded by Quentin Tarantino at Cannes, Filipino filmmaker Brilliante Mendoza appears to finally live up to his name. 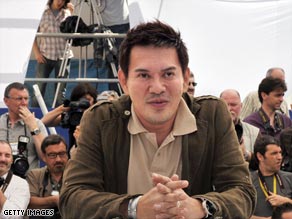 Facing the press in Cannes, Brillante Mendoza went on to pick up the best director prize.

Despite only directing for four years, Mendoza won the award for best director at the Cannes Film Festival earlier this year for "Kinatay", beating off competition from filmmaking royalty including Tarantino himself.

After picking up the award, Tarantino wrote to Mendoza congratulating him on his award and saying his film was "bold, daring and... the whole point of making movies in the first place."

Making movies is something that the 49-year-old from San Fernando in the Philippines is relatively new to. He spent 20 years as a production designer before directing his first film in 2005, but since then he hasn't looked back and in just over four years has made another seven films.

His style of social realism has attracted as much critical acclaim as it has baffled and alienated audiences.

But if an artist's anathema is indifference, Mendoza has more than succeeded in avoiding that curse.

Featuring explicit sex, his films have been faced with heavy censorship in his native Philippines, and while Penn and the other judges at Cannes loved his film "Serbis," it proved to be one of the most divisive; "Variety" magazine called it exploitative and veteran film critic Robert Ebert said it was the worst film at the festival.

"I believe that my films will find their audience, probably not now but maybe in the future... I'm doing my job, by presenting some stories that normally a mainstream director or mainstream filmmaker won't tackle, won't show," he told CNN.

"Serbis" was only the third ever film from the Philippines to be shown in Cannes, and while elevating Mendoza to a new level of attention, the man himself hopes it will give the whole country a higher profile.

"Because now they will look at Filipino films in a different way, unlike before they only see... films from the Philippines like melodrama, about prostitution, about poverty," he said.

Citing European neo-realist filmmakers like Francois Truffaut as inspirational figures, Mendoza has crafted his own style of Filipino realism on the screen. He shoots without additional lighting and often only gives actors an outline of the scene they will be filming, letting them improvise around their characters.

"I don't want to limit them, I just want to give them the freedom. I don't even show my actors the script. I mean I just tell them you know the lines they're going to say in that day. So they don't know exactly what will happen," he told CNN.

Using raw filming techniques, Mendoza hopes to expose the naked truth of life in the Philippines, but he's also aware that when directing, he reveals much about himself.

"As a filmmaker you can't help giving something about yourself in your film. A friend of mine told me 'You should take it easy in exposing yourself because you expose yourself too much in your film.'

"And I said, 'I can't help it.' I mean, I want to be honest with my films, that's why I'm showing how I feel, my emotions, what I'm going through. So that's why I would say, you can't help to have a huge responsibility as a filmmaker," he said.