U2 looks to a new 'Horizon'

LOS ANGELES, California (CNN) -- Getting an exclusive broadcast interview with all four members of U2 was the easy part. Getting an advance copy of their new CD required a bit more strategizing. 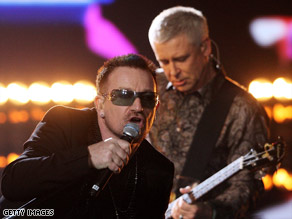 Bono, left, and Adam Clayton perform at a recent awards show. U2 has been together for 30 years.

We were scheduled to speak with the Rock and Roll Hall of Famers during the two days they were in Los Angeles for the Grammy Awards, where they'd be opening the show with their new single, "Get on Your Boots." But before that happened, I needed to hear the music.

Lori Earl, the band's longtime publicist, said I would be given one of five dubs of the band's 12th studio album, "No Line on the Horizon." Needless to say, they were concerned about piracy -- especially three weeks ahead of the record's March 3 release date.

I was to tell no one I had the CD. Messengering it to my office wasn't an option, because it might sit unattended in a mailroom or on my desk. Delivering it to my house was also deemed a security risk. We talked briefly about an executive from the record label hand-carrying the CD and passing it off to me at a pre-Grammy event honoring Neil Diamond. Finally, it was decided the safest option was for me to drive out to Pacific Palisades and pick the disc up from someone named Cheryl.

It was raining cats and dogs at 10 p.m. as I drove to the band-designated location. Cheryl brought the package down to my car, grinning broadly. The CD was hand-numbered, and my name was printed on the disc with a Sharpie. There was a note on the plastic case that read, "Do not duplicate, copy, clone, upload or distribute in any manner."

"Put this in your CD player and crank it up," Cheryl instructed. "Listen to it more than once. It's the kind of album that gets better each time you listen to it."

Watch the band talk and play »

I drove home in the pouring rain with the new U2 record blasting from my stereo. The first two tracks were almost danceable. The third cut -- a gorgeous spiritual ballad called "Moment of Surrender" -- was grounded by a throbbing bass line and lasted nearly eight minutes. Track four featured a group shout-along chorus.

The new album signaled an exciting departure for the band. It was much more experimental than their last two offerings -- and I wanted to talk about it with someone. But I couldn't discuss it with anyone. Not my best friend, not my cameraman, not even my mother. By the time I got home, the lyric sheets had been e-mailed to my BlackBerry.

The next day, CNN interviewed Bono and The Edge at the Chateau Marmont -- in one of the old bungalows that all seem haunted. Then we raced down to Staples Center to grab drummer Larry Mullen Jr. after the band rehearsed for the Grammys. We borrowed Neil Diamond's dressing room, joked about the massage table that was set up in the corner, and tried not to eat the box of designer chocolates someone had left him as a gift. We didn't see bassist Adam Clayton until the next day, after U2 had performed on the Grammys.

"After this interview, I'm being whisked away in a limo to the airport," he said.

"To hop on your private plane?" I asked.

By the way, the album eventually did leak -- through a supposed record label glitch in Australia. I breathed a huge sigh of relief. Thank God they traced it to someone's desk in Australia, and not to my house in Los Angeles.

Today, U2 begins an unprecedented five-night residency on "Late Night With David Letterman." Tuesday, "No Line on the Horizon" hits store shelves and digital outlets in the United States.

The band members talked to CNN about burnout -- "Horizon" was recorded after a marathon, 129-show tour -- band infighting and a bird incident involving Mullen's drum kit. The following is an edited version of those interviews.

CNN: You guys must have been terribly burned out after your last tour.

Bono: We won't do burned out! (laughs)

Larry Mullen Jr.: There is no such thing in U2 as taking a long break. When we come off the road, it's straight into the studio. And that's just the way we work. You know, we've got no place to go. I wouldn't know what to do with myself if I had time off.

CNN: Well, you did work in some pretty great locations.

Edge: Yeah, we did. We did a lot of recording in Fez [Morocco] on this one, as well as some in New York, and some in London [England] and a little bit in Dublin [Ireland]. I think for our band, something about changing our location gives us a different perspective, and always seems to change the music in a way.

Bono: Fez is beautiful little city. It's the religious capital of Morocco, and they have a religious music festival there -- you know, Sufi singers and Bango drummers from all over the world. I was invited to speak there, and I asked the band -- would they be interested in coming along? And surprisingly, they agreed. We set up in a little hotel -- they call them riads -- and it's a hotel around a courtyard. We set up the band in the courtyard with the square sky over our heads and birds flying in used to come [and] s*** on Larry Mullen's drum kit. He wasn't happy with that.

Mullen: We don't find it easy to make music. We find it a real challenge. It doesn't come easy, and that's why it takes us two years to come out with a record.

CNN: You make it look like it comes naturally, and it's easy.

Mullen: Um, no. I think it's called "show business."

Edge: You've got to almost see it as play, and then, ironically, you get to some very intense stuff.

Adam Clayton: There was some kind of weird magic from the very, very beginning. I think it was because we had been touring a lot, so we could play really well together. But we were really -- I don't know. We were really nice to each other, and that kind of feeling carried through to the end of the recording. And even now, we're getting on great.

CNN: No catfights? No power struggles?

Mullen: Oh, there's lots of them. There's catfights all the time. We spent 30 years arguing, but generally speaking, on a musical level there is consensus. Everything else -- we disagree.

Clayton: A lot of times when we were in that creative environment, the antagonism and the fighting is what produces the pearls. But this was an environment where everybody supported each other, and I think we produced more delicate tones. With this record, it was like we had our self-confidence as a band, and we started to play much more for each other and to each other than in terms of how far we can kick it out of the ballpark.

CNN: Are you pleased with the new album?

Mullen: It's not an easy record, and it's complex. "[Get on Your] Boots" is one of those things where our audience is kind of divided on whether they think it's a good or bad thing. I'm very pleased with it. I think it shakes it up a bit, and we need to do that. We've had two albums -- "All That You Can't Leave Behind" and "How to Dismantle an Atomic Bomb" -- and they were very U2 as U2. This album is a lot more experimental.

Bono: If we're going to make an album, it's very important to us that every song on the album is a "10." I think the reason people aren't buying albums is a lot of times they only get one or two good songs. For us, every song had to be extraordinary, and special, and unique, and the whole had to be better than the sum of its parts. You'll have to decide if we achieved that, but that's what we were attempting.

Edge: No album of ours is ever made in a vacuum. There's always a huge amount of what's going on in the culture that informs our work. But when it comes out in the end, it always sounds like U2.

Clayton: We see each other a lot -- just to figure out what music we're listening to, what movies people are seeing, just to know where their heads are at. And if we don't have too much to talk about, we just swap knitting tips.

Bono: Edge lives down the road -- literally -- and our kids go to school together, and we hang out a lot. We always look forward to seeing Larry and Adam, but you know, they guard their privacy more than we do.

CNN: Sounds like you've figured out how to work together and live together.

Bono: Everybody has just enough rope, just enough time, to be an a**hole. You know what I mean? 'Cuz everyone's going to be one at some point. Or maybe that's just me! But, you know, people need space to make mistakes. People have to do their own growing, and we don't all grow at the same time.

CNN: So what I want to know is what are your mistakes?

Edge: I don't think the relationships would work if other than for the music. The interesting thing is we're so different, and that's our strength. We are united in one cause, which is U2, and the work that we do and the music that we make. As long as we're making great music, there will never be any issues with our band. But if we make one bad album, I'd say the fighting, the friction that would cause, would be huge.

Clayton: I think head-butting is something that you do when you're a young man. As you travel down the road together, you stop thinking about what the band can do for you, and you think much more about what you can do for the band. You start to really appreciate what everyone else does, and realize how good they make you look.

Mullen: We were always labeled "big" -- you know, "U2's a big band." And you want to be a great band, and I think that's one of the reasons we stick at it. There's still work to be done.