Death Cab for Cutie moved by the music

(CNN) -- Death Cab for Cutie, the Grammy-nominated indie band that shot to the top of the Billboard charts with its latest album, "Narrow Stairs," has come a long way since its basement-recording beginnings in Bellingham, Washington. 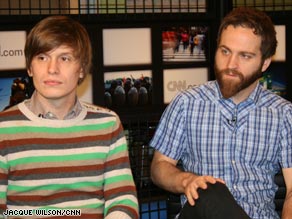 Together for more than 10 years and formed while its members attended Western Washington University, the band has six studio albums behind them, their songs have graced popular TV and film soundtracks, and their sell-out tours have brought the musicians all over the globe.

But the success is not something the group takes for granted.

"We never got into this for world domination. There were never designs to be 'rock stars,' " said Chris Walla, guitarist and producer.

"The fact that I get to make a living doing something that I just passionately love to do is something that I wake up every day and am thankful for," added Nick Harmer, bass player. "It's not lost on me; it really isn't. It's phenomenal."

Death Cab for Cutie, which is named after a song performed by the Bonzo Dog Doo-Dah Band in the 1967 Beatles film "Magical Mystery Tour," released "The Open Door EP" last month. It's a compilation of tracks that didn't find a home on "Narrow Stairs" but that the band didn't want to lose forever.

Days before their most recent tour cycle ended and before the summer tour begins, Walla and Harmer -- two of the band's four members -- sat down with CNN to discuss the latest EP, the current bands that move them and the darkness that may or may not drive their music.

CNN: Talk to me about the band's name, which was selected by Ben Gibbard, Death Cab for Cutie's founder. If you could turn back the clock, would you go with something different?

Chris Walla: [Ben] was in a "Magical Mystery Tour" all-the-time kind of phase. He made a grand proclamation from the couch at one point that if he ever had another band, he was going to call it Death Cab for Cutie.

Nick Harmer: Knowing what we know now, Ben has said that he would love to have shortened it somehow to a snappier name. We joke about changing it.

Chris Walla: Exactly! All the band names are taken.

CNN: Why release an EP (extended play; more than a single but less than a full-on album) right now? Is it a taste of things to come?

Harmer: We've always treated the EP as kind of a side dish to the main course during an album cycle. These are songs that were recorded at the same time as the songs that made the album "Narrow Stairs." They're sort of part of this chapter of the band.

For us, it's a nice way to have some new songs to play on tour, kind of get some new material in the world and keep things interesting. We recorded them. They were finished. It would be kind of weird to leave them on a reel someplace.

CNN: How has the state of the economy, if at all, affected your tour and plans?

Walla: This tour has done really, really well for us. If anything, I think that we're more mindful of just the fact that in a world of so many entertainment choices how amazing it really is to be on a really successful, solid, good tour.

Harmer: We really haven't seen an impact. I expected there to be one, to be honest, but all the numbers are pretty consistent with all the touring numbers we've ever done.

CNN: Let's talk a bit about the persona of indie rock musicians: the depression, the melancholy, the darkness. What do your parents make of this? Are there any issues you'd like to discuss?

Walla: Our parents are all terrible people. We all came from broken homes. (laugh)

Walla: It's not by design. We have great families. We have great homes. It's sort of hard to explain, I guess. ... We do this because music totally moves us in a complete and absolute sort of way. It ends up just coming out in heart-on-your-sleeve, heavy, sort of really personal ways.

Harmer: I've always felt like it's more about the bittersweet qualities of life than it is about the dark brooding. ... It's more about just being honest about the different stations that you find yourself in in life.

CNN: What bands are you listening to these days? Who do you really like?

Harmer: That's the thing about being on the road with so many people that are music fans. There's always a new record that someone's found that we're listening to. Ben is really kind of always combing through old records. I think [Walla] and I probably do more on the what's new and what's out in the world. The Gaslight Anthem, I hear them all the time now.

Walla: Yeah, the Gaslight Anthem record's great. There's a band from Seattle called the Lonely Forest whose record I just picked up. They're a new band, it came out few weeks ago, and that's totally doing it for me right now. ... Telekinesis from Seattle, the new Metric record I think is great. Those are the big ones right now.

CNN: Tell me about your political involvement and your backing of causes. (Walla, for example, got involved in the Obama campaign and has done some work for PETA.)

Walla: It's little things here and there, which is sort of how I feel activism should work. You can't do everything all the time, but you can do what you can when you can. I wish I could do more, but ... not everybody can be Bono.

All About Death Cab for Cutie • Alternative and Indie Rock