(CNN) -- Sales of Michael Jackson's albums have gone through the roof since the news of his death. 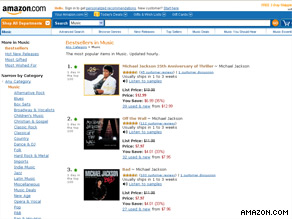 On Friday, the late singer was enjoying the commercial revival that had been eluding him in recent years, due to a lack of new material and public interest.

Michael Jackson albums took top 15 slots on Amazon.com top 50 album downloads. The story was the same on iTunes where the late singer's albums dominated seven out of the ten top slots on the site.

The 25th anniversary reissue of Jackson's 1982 album, "Thriller," which is the top selling album of all time, is at the top spot on Amazon.com. It was followed by a special reissue of 1979 album "Off the Wall" and 1987 album "Bad."

His last studio album "Invincible," which he released in 2001 came in at number 10, perhaps reflecting the public's preference for Jackson's earlier work.

On European online music retailer Play.com sales of Jackson's 10 most popular albums increased by a staggering 7,860 percent. Meanwhile, searches on Michael Jackson are up 8,900 percent and total downloads on the site have increased 5,167 percent.

The public's unprecedented rush to buy Jackson's albums has been likened to the the reaction when other music icons like Elvis Presley and Frank Sinatra died.

"There are an awful lot of people that think his contribution to music was huge, and as an artist he was so talented -- even though he was such a complicated artist, particularly towards the end of his life," Stuart Rowe Chief Operating Officer of Play.com told CNN.

"People want some kind of memento. They want to appreciate and listen to his music again, and mark his passing by listening to it all again."

According to Rowe because of their quality, many of Jackson's albums are perennial bestsellers, and while there was also some increase in interest in his music because of his sold out 50-date London tour which was scheduled to kick off in mid-July.

"But nothing like the effect of the news," said. "It's taken this for his music to be brought to a whole new generation of people."

Five of Jackson's solo albums -- "Off the Wall," "Thriller," "Bad," "Dangerous" and "HIStory," are among the top-sellers of all time, according to Jackson's label Sony Music.

During his career, Jackson sold an estimated 750 million records worldwide, released 13 No.1 singles.

"There's the whole sort of grieving of a superstar which the general public will go through worldwide," said Rowe. "You will hear a lot more Michael Jackson being played over the next few weeks."