LOS ANGELES, California (CNN) -- While authorities do not yet know what killed Michael Jackson, the possibility that anesthetics -- particularly the drug Diprivan -- might be involved continues to swell with each new revelation. 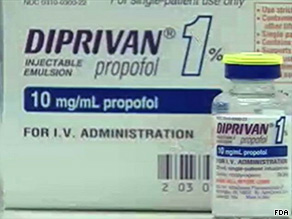 Propofol induces a coma, not sleep, an anesthesiologist told CNN.

Sources close to Jackson told CNN's Dr. Sanjay Gupta that the singer, who suffered from a sleep disorder, traveled with an anesthesiologist who would "take him down" at night and "bring him back up" during a world tour in the mid-90s.

The drug Diprivan, known by its generic name Propofol, is administered intravenously in operating rooms as a general anesthetic, the manufacturer AstraZeneca said Friday.

"It is neither indicated nor approved for use as a sleep aid," said spokesman Tony Jewell.

The drug works as a depressant on one's central nervous system.

"It works on your brain," said Dr. Zeev Kain, the chair of the anesthesiology department at the University of California Irvine. "It basically puts the entire brain to sleep."

However, once the infusion is stopped, the patient wakes up almost immediately.

"So if you're going to do this, you'd have to have somebody right there giving you the medication and monitoring you continuously," Kain said.

Dr. Hector Vila, chairman of the Ambulatory Surgery Committee for the American Society of Anesthesiologists, said he administers the drug during office procedures such as urology, dentistry and gynecology. It is also the most common anesthetic for colonoscopies, he said.

Both doctors said that while they have heard of the drug being abused by health care professionals, who have ready access to it, they had not heard of it being used as a sleep aid medication.

"Propofol induces coma, it does not induce sleep," Kain said. "I can put you in a coma for as many days as you want. And, in fact, in intensive care units who have patients who are on a ventilator, that's one of the drugs they use."

Dr. Rakesh Marwah, of the anesthesiology department at the Stanford University School of Medicine, said the drug can lead to cardiac arrest without proper monitoring.

Not enough carbon dioxide exits the body; not enough oxygen enters. And the situation can cause the heart to abruptly stop.

"[It is] as dangerous as it comes," Kain said. "You will die if you will give yourself, or if somebody will give you, Propofol and you're not in the proper medical hands."

Los Angeles police have interviewed Jackson's cardiologist, Dr. Conrad Murray, who apparently tried to revive the singer after he was found unconscious on June 25.

They also impounded Murray's car, saying it might contain evidence -- possibly prescription medications. Police did not say whether they found anything.

Through his lawyers, Murray has released several statements saying that he would not be commenting until the toxicology results into Jackson's death are released. The tests are due back in two to three weeks, the Los Angeles County coroner said Thursday.

"We are treating all unnamed sources as rumors. And, as we have stated before, we will not be responding to rumors or innuendo," Murray's lawyer, Matt Alford said Friday. "We are awaiting the facts to come out and we will respond at that time. "

The anesthesiologist who accompanied Jackson during the HIStory tour in the mid-'90s also refused to comment, although he acknowledged Jackson suffered from a sleep disorder.

"I'm very upset. I'm distraught. Michael was a good person. I can't talk about it right now," Dr. Neil Ratner said outside his Woodstock, New York, home Thursday. "It's really something I don't want to talk about right now. I lost a good friend."

On Thursday, the California State Attorney General's Office said it will assist Los Angeles police in sifting through information in a state database that monitors controlled medication.

The database, known as CURES (Controlled Substance Utilization Review and Evaluation System), contains an estimated 86 million records that list all doctors who prescribe such medication, the amount, the date and the person who receives it.

Authorities said the database was used in the investigation after the death of former model and reality TV show star Anna Nicole Smith.

A day earlier, federal law enforcement sources said DEA agents would be looking at various doctors involved with Jackson, their practices and their possible sources of medicine supply.

A number of people close to Jackson have expressed concern that medication could have contributed to the singer's death at age 50.

During that week, Jackson asked Chopra for a prescription for a narcotic, the doctor said.

"I said, 'What the heck do you want a narcotic prescription for?'" Chopra said. "And it suddenly dawned on me that he was probably taking these and that he had probably a number of doctors who were giving him these prescriptions, so I confronted him with that. At first, he denied it. Then, he said he was in a lot of pain."

Brian Oxman, a former attorney for the Jackson family who was with the family in the hospital emergency room on June 25, also expressed concern about medications the pop star was taking.

"I talked to his family about it, I warned them -- I said that Michael is overmedicating and that I did not want to see this kind of a case develop," Oxman told CNN the next day.

Earlier this week, the nutritionist Lee, a registered nurse, said Jackson suffered from severe bouts of insomnia and asked her to find him some Diprivan.

"I told him this medication is not safe," Lee said. "He said, 'I just want to get some sleep. You don't understand. I just want to be able to be knocked out and go to sleep.' "

Lee, however, said she did not know of any doctors who would have given Jackson the drug nor had she seen him use it.

CNN's Danielle Dellorto and Elizabeth Landau in Atlanta, Georgia, and Drew Griffin in Los Angeles, California, contributed to this report.