(CNN) -- Nanci Griffith wanted to look on the bright side. 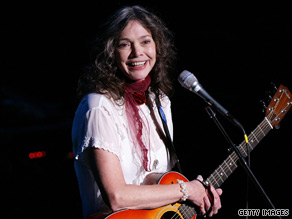 Nanci Griffith, who says she's "fed up with negativity," was revitalized by the election of Barack Obama.

And who could blame her? In the past decade, Griffith -- perhaps best known for her Grammy-winning 1993 album, "Other Voices, Other Rooms" -- had faced a political climate she didn't agree with, as well as recovery from thyroid and breast cancer, which she was diagnosed with in the late '90s.

Songwriting had become a struggle for the singer with the gentle, crystalline voice.

However, with her latest album, "The Loving Kind" (Rounder), Griffith is as focused and passionate as she has been in years. Sparked by the changes in her life and American politics, she said, music has been vital to her personal resurgence.

"It was nice to focus on things outside of my body. Music has always done that for me," she said.

Describing herself as someone who was "fed up with negativity," Griffith was equally inspired by her fellow countrymen.

"[The] American people will not let this country collapse," she said.

The idea motivated her to look at her country's dark path of injustice not so long ago, stories that worked their way into her songwriting.

"In some ways, I'm just a journalist. I [want] my audience to hear these stories," she said.

CNN spoke with Griffith from her home in Nashville, Tennessee.

CNN: Being a folk singer and your views being what they are, was it tougher or maybe easier to write songs from 2000 to 2008?

Nanci Griffith: It was very difficult for me. I was hurt by the direction my country was going in. And then, after [the 2008 election], everything came spilling out. Things came along like the Mildred and Richard Loving case ("The Loving Kind"), where Mildred died, and I read her obituary. [The Lovings were a couple whose interracial marriage was against the law in Virginia at the time.] That was such an inspiration. ... Just wondering why I never knew about this and how important that case is currently with equality in marriage. Little things. Bit by bit, my heart started to open up again, and I could write!

CNN: Had you ever gone through that before?

Griffith: No, never in my life. I've always been a very prolific writer.

CNN: Now, what about writing in the age of Obama?

Griffith: (laughs) It feels great! People may be down on their luck, financially. But I see so much optimism about the direction of the country and [general] openness.

CNN: Now, in addition to "The Loving Kind," there are other songs based on actual events on this record. Tell me about "Not Innocent Enough."

Griffith: That's based on Philip Workman's case in Memphis [Tennessee]. He was robbing a Wendy's -- was a heroin addict -- and police came in, and an officer was killed. Now, Workman didn't kill him; it was friendly fire. Workman was convicted anyway and executed. I'm a total abolitionist when it comes to the death penalty, but this case really stunned me, because I feel like this country has evolved enough to where we shouldn't have to live with the death penalty.

CNN: Is it hard as a writer/musician to inhabit those songs, knowing that they are actual events?

Griffith: Not really. I feel like, in some ways, I'm just a journalist. I don't express my opinion [in the songs], necessarily. But it's important to me that my audience hear these stories. I want as many people to know about Loving v. Virginia as possible.

CNN: Do you feel like it's a more palatable way to become aware of a story like that when a song is attached to it?

Griffith: I do. I've been informed many times through music. Pete Seeger, Odetta, Dave Van Ronk, Bruce Springsteen ... so many folk songwriters. It's all around you.

Griffith: It's about people like him. This country is full of them, and especially my home state of Texas. It's a [perspective on] people who go through life getting away with everything.

CNN: Do you feel a sense of vindication with President Obama's election, or at least a sense that things are moving in a direction you're in favor of?

Griffith: I hope so. Right now, he is my hero. So is his wife.

CNN: What in your past steered you into a topical songwriter?

Griffith: I was always more interested in story songs, things with a point of view ... and things that informed me.

CNN: Is there a different process of writing those topical songs versus a song like "Up Against the Rain," which is clearly more personal?

Griffith: There is a burden to writing [those topical songs]: You better have your facts straight. When you're writing a personal song like "Rain," it's straight from your heart and seems to just flow.

CNN: "Sing" seems like it would fit that description. Does that song sum up your life in a way?

Griffith: Many have asked that, but I was actually inspired to write that by watching an interview with Shania Twain where she said it would not have mattered if she remained a lounge act for her whole career. It's not something you choose. It's just what you do.

All About Grammy Awards • Music