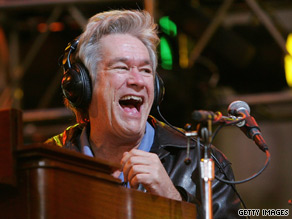 Bill Champlin is leaving Chicago. "This music is callin' me," he says of his new solo venture.

"Bill Champlin is no longer in Chicago. He was a long-time band member and we wish him all the best as he embarks on his new solo project, for which he's worked long and hard.," a statement from Chicago's management said Monday

"After 28 years with Chicago, singer-songwriter-keyboardist Bill Champlin is parting ways with the classic jazz/rock band to focus once again on his solo career," Champlin's publicist Judi Kerr said of the split.

"This music is callin' me," said Champlin, whose new solo album "No Place Left to Fall" was released last week on the DreamMakers label. "I'm really looking forward to playing more intimate venues and hearing what fans think of the new music. I can't wait to spend some one-on-one time with my old and new fans!"

Champlin has scheduled a string of concerts along the West Coast in November to promote the new album.

Champlin joined Chicago in 1981 at a pivotal point in the band's history. After a string of 12 platinum and multiplatinum albums, Chicago was struggling for direction in the years after the death of original guitarist Terry Kath in 1978.

The appearance of the new vocalist/keyboardist/guitarist on "Chicago 16," along with the production skills of David Foster, marked a new era of chart success for the band.

Champlin was most prominently featured on "Chicago 19," where he sang lead on three of the album's four hit singles, including the chart-topping "Look Away," which ranked No. 1 on Billboard's 1989 year-end Hot 100.

Before joining Chicago, Champlin picked up a pair of Grammy Awards for tunes he penned for other artists: "After the Love is Gone" for Earth, Wind & Fire and "Turn Your Love Around" for George Benson.

Champlin also occasionally performs with the Sons of Champlin, a horn-heavy band he helped found during the late-1960s San Francisco, California, psychedelic scene.

Chicago is on a co-headlining tour with Earth, Wind & Fire this summer, with the next show scheduled for August 21 in Oklahoma City, Oklahoma. Lou Pardini, a Grammy-nominated keyboardist who has played with Stevie Wonder and Santana, will replace Champlin, according to Chicago's management.

Chicago formed in 1967, committed to the concept of a rock 'n' roll band with horns. First called The Big Thing, the group was known as Chicago Transit Authority on its debut album before taking its present name.

In more than four decades, Chicago has sold more than 122 million recordings. It had five consecutive No. 1 albums and has had more than 50 Top-40 singles.

All About Pop and Rock Music