LOS ANGELES, California (CNN) -- Michael Jackson's family and about 200 of their closest friends gathered on a hill Thursday evening for their final farewell to the pop singer, who died 10 weeks ago. 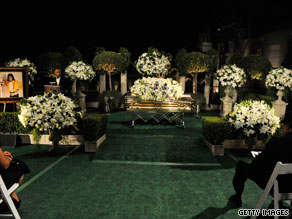 Jackson's burial may lay to rest some of the mystery and controversy that erupted with his sudden death on June 25.

His large family was divided over where the superstar's final resting place should be, but matriarch Katherine Jackson settled on a crypt inside the well-guarded and ornate Great Mausoleum at Forest Lawn cemetery in Glendale, California.

Thursday's service began 90 minutes past the announced start time, leaving dozens of celebrities -- including Elizabeth Taylor -- waiting in their seats for the 26 cars carrying the Jackson clan to arrive.

It began with Jackson's five brothers -- each wearing a single sequined glove -- carrying his flower-covered bronze casket onto the outdoor stage among six large bouquets of white lilies and white roses, along with green topiaries.

His three children, led by daughter, Paris, 11, placed a crown atop their father's coffin, which a family spokesman said it was "to signify the final resting place of the King of Pop."

Jackson's children, parents and siblings took their seats in the front row, while his nieces and nephews filled several rows of white chairs behind them.

After an opening prayer by Pastor Lucius Smith, soul music legend Gladys Knight sang the gospel hymn "His Eye Is on the Sparrow."

Clifton Davis sang "Never Can Say Goodbye," a hit he wrote for The Jackson 5 -- the group that featured a young Michael and his brothers.

What was said by Jackson's father, Joe Jackson, and others who took the lectern is not publicly known, because the family barred news cameras from the ceremony. A family statement issued afterward said close friends and family, including the Rev. Al Sharpton, spoke "spontaneously to celebrate Michael's life."

News helicopters hovering above captured video from a distance, but without sound.

Lisa Marie Presley, one of Jackson's former wives and the daughter of Elvis, attended the service, according to the family statement. It did not mention Debbie Rowe, Jackson's second wife and the mother of his two oldest children.

Macaulay Culkin, the "Home Alone" actor who spent time with Jackson during his Neverland Ranch days, was there with his girlfriend, actress Mila Kunis.

Actors Corey Feldman and Chris Tucker were also seen arriving for the service.

Thomas Mesereau, the lawyer who successfully defended Jackson in a child molestation trial, sat just behind the Jackson family.

When the hour-long service ended, his brothers lifted Jackson's casket for a final time to carry him inside the Great Mausoleum, where he was placed in his crypt at 9:43 p.m. PT (12:43 a.m. ET Friday).

The family statement said it was "his final resting place."

The family and friends then drove to an Italian restaurant eight miles away, in Pasadena, California, for "a time of celebration."

The massive mausoleum, the final resting place for Clark Gable, Carole Lombard and dozens of other celebrities, is normally open to tourists, though the public is denied close access to crypts. Security guards, aided by cameras, keep constant vigil over the graves and crypts, which are surrounded by a world-class collection of art and architecture.

The Forest Lawn Web site boasts that the mausoleum, which draws its architectural inspiration from the Campo Santo in Italy, "has been called the 'New World's Westminster Abbey' by Time Magazine."

The mystery of where Jackson would be buried became a media obsession in the weeks after his death.

After his body was loaded onto a helicopter at UCLA's Ronald Reagan Medical Center hours after his June 25 death, it stayed in the custody of the Los Angeles County coroner for an autopsy.

Again, speculation about Jackson's whereabouts grew when the media lost track of his casket after his brothers carried it out of sight inside the arena. It was only recently confirmed that it was taken back to the Hollywood Hills Forest Lawn while awaiting his family's decision.

Though Thursday's interment may settle one Jackson mystery, a more serious one remains. The coroner announced last week that he had ruled Jackson's death a homicide. A summary of the coroner's report said the anesthetic propofol and the sedative lorazepam were the primary drugs responsible for the singer's death.