(CNN) -- In 1967, the Mamas & the Papas had a hit with a song that detailed, with bittersweet harmonies, the checkered history of the band. The song, written by the group's John Phillips and his wife, Michelle, was called "Creeque Alley." 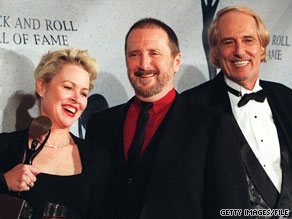 Michelle Phillips, Denny Doherty and John Phillips, here in 1998, were members of the Mamas & the Papas.

If the song were to be updated today, it might have to be retitled "Creep Alley."

With the claims by John's daughter, Mackenzie, that she had an incestuous relationship with her father, the story of Phillips and his group -- in music, models of California dreams and California dreamin' -- takes on a darker hue.

The story was already tangled, a motley love- and drug-soaked tale of excess set to the group's distinctive four-part harmonies.

Phillips left his first wife, Mackenzie's mother, Susan Adams, for 18-year-old Michelle, whom he'd met in a San Francisco club while touring in the early '60s, according to the band's biography on Allmusic.com.

The band's lead male singer, Denny Doherty, later had an affair with Michelle; she was forced out of the group for a time. The fourth member, Cass Elliot, had an unrequited crush on Doherty, the biography noted.

After the Mamas & the Papas' success with such singles as "California Dreamin' " and the No. 1 hit "Monday, Monday," the Phillipses bought a Bel Air mansion from which they ruled over the Los Angeles music scene.

In his 1986 memoir, "Papa John," John Phillips, who died in 2001, remembered hosting parties for the Beatles when they visited town.

John Phillips, the band's primary songwriter, was at least six years older than the others and did not shy from the task of addressing the group's pain and confusion in song. In such songs as "Got a Feelin'," "I Saw Her Again Last Night" and "Trip, Stumble and Fall," he cast a cold eye on the band's romantic entanglements, even as his melancholy and sometimes cutting lyrics were often belied by those sunny harmonies and Lou Adler's slick production.

"One doesn't try to hold Cass and Denny and Michelle together," he said in a 1995 interview. "It's a useless task to start with. You just sort of stay out of the way and let things roll as they can."

In 1968, the group split up. There was a 1971 reunion that produced the contractually obligated album "People Like Us," but the experience was "horrible," John Phillips recalled in the liner notes to the group's anthology, "The History of the Mamas and the Papas."

The group members had mixed success after the breakup. Elliot, who died of a heart attack in 1974 (and not by choking on a sandwich, as urban legend has it), pursued a solo career; she had a handful of hits. Doherty and John Phillips also tried their hands at solo careers; the latter's 1970 "John, the Wolf King of L.A.," produced a minor hit and is now considered a classic but sold relatively poorly upon release.

More common were the stories of trouble. Michelle and John Phillips divorced in 1970; late that year, Michelle was married to Dennis Hopper for eight days.

John Phillips, who married Genevieve Waite in 1972, became increasingly immersed in drugs, says his Allmusic biography, to the point where he couldn't finish an album commissioned by the Rolling Stones' Mick Jagger and Keith Richards. In 1981, he was convicted of drug trafficking.

By that point, daughter Mackenzie says, she was also a full-blown drug addict.

"I grew up in a place where there were no rules ... which did not serve me well, and everybody, I think, knew that," she said on a reunion special for her '70s sitcom, "One Day at a Time."

In her new book, "High on Arrival," she claims she had become sexually involved with her father in 1979, after he forced sex on her the night before she married a rock manager, Jeff Sessler. (Earlier that year, the house she shared with Sessler burned down, taking all her belongings with it.)

According to Mackenzie Phillips, the affair with her father lasted 10 years.

She told Chynna Phillips, her half-sister, about the affair in the late '90s, according to an interview with Chynna in Us magazine.

"Somebody could have dropped a piano on my head, and I probably wouldn't have felt it," Chynna Phillips told the magazine. "But I knew it was true. I mean, who in their right mind would make such a claim if it wasn't true?"

She says the news sent her into "a deep, deep sadness and depression for about 10 days. A part of me died when I found out."

John Phillips also underwent rehab but struggled for the rest of his life. He had a liver transplant in 1992 but was photographed drinking several months later. He toured with versions of the Mamas & the Papas, some including Mackenzie. He died in 2001 of heart failure.

Chynna Phillips and Mackenzie's "One Day at a Time" co-star Valerie Bertinelli have since rallied around her. But others have not.

"I am stunned by Mackenzie's terrible allegations about her father," Waite, John Phillips' third wife, wrote in a statement released to "The Oprah Winfrey Show." Mackenzie Phillips appeared on the show Wednesday. "I would often complain about her overly familiar attitudes towards him, and he said it was just her way. John was a good man. ... He was incapable, no matter how drunk or drugged he was, to have sexual relations with his own child."

And Mackenzie's half-brother, Tamerlane, the follower of an Indian guru, is having none of it.

"My family is and always will be a decrepit bowl of dog urine compared to Nityananda of Ganeshpuri. That is how great Nityananda is," he told the New York Post's Page Six. "Worship Nityananda, not the Phillips family."