(CNN) -- Actress Mackenzie Phillips has said that she believes she had a "genetic predisposition" to the life of sex, drugs and rock and roll that have come to define her. 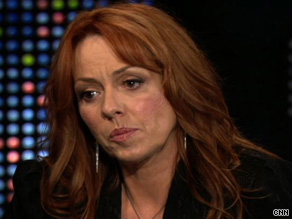 Mackenzie Phillips tells CNN's "Larry King Live" that her father raped her in 1979.

In a 1999 interview on CNN's "Larry King Live" on "Why Some Childhood Stars Crash and Burn," the former "One Day at a Time" star said she didn't blame Hollywood for the years of drug and addiction she had endured.

By the time she did the interview, her well-publicized addiction to cocaine, drug arrests and stints in rehab had overshadowed an acting career once full of promise.

Then, on Wednesday, the 49-year-old actress revealed on "The Oprah Winfrey Show" that she engaged in an incestuous relationship with her father, legendary musician John Phillips, for nearly 10 years.

In her tell-all memoir, "High on Arrival" -- named after a song her father dedicated to her -- she claims the relationship began in 1979. She claims her father forced himself on her while they were under the influence of drugs on the night before she was to marry Jeff Sessler, a member of the Rolling Stones' entourage.

She ended the relationship a decade later, when she became pregnant and realized she did not know who had fathered her child -- her husband or her own father -- and terminated the pregnancy, the actress told CNN's "Larry King Live."

Watch Phillips discuss her alleged incestuous relationship with her father »

But before the incest claims -- and subsequent denials from relatives -- Mackenzie Phillips was better known as a child actor full of promise who fell from grace under the toxic guidance of her drug-addicted father.

Born Laura Mackenzie Phillips in 1959 to John Phillips and Baltimore socialite Susan Adams, Phillips told People magazine in 1980 that she alternated between two wildly different worlds after her parents divorced when she was three years old.

"My mother concentrated on bringing me up a proper lady," Mackenzie Phillips told the magazine. "And then on weekends at my dad's place, I would find Mick Jagger and Donovan and the Beatles hanging out. I remember crawling all over Paul McCartney."

Her father taught her to roll a joint when she was 10, she tried cocaine for the first time when she was 11 and lost her virginity at age 12, she told Meredith Vieira of NBC's"Today" show.

When she was 12, a talent scout for Francis Ford Coppola spotted her playing in a band with classmates on amateur night at the Troubadour, according to People.com. She eventually landed a memorable role in the 1973 hit coming-of-age flick, "American Graffiti."

After filming, her mother sent her to a Swiss boarding school, but the rebellious teen didn't last long in exile. She returned to her father's home in Los Angeles under the supervision of her father's sister, Rosemary Throckmorton. When her father and stepmother left for New York in 1974 and never returned, Mackenzie, her brother Jeffrey, moved in with their aunt in "a little house behind the Hollywood Bowl which we shared with 12 cats," according to People.com.

Despite her relocations, Phillips' career continued to advance. At 15, she appeared in her second movie, "Rafferty and the Gold Dust Twins," with Alan Arkin. In 1975, she was offered the role of Julie Cooper on CBS' hit sitcom, "One Day at a Time," according to IMDB.com.

"By the time I turned 18, I moved into a little chalet of my own and felt very grown-up," Mackenzie told People in an interview in 1980.

As her star grew, so did her appetite for drugs, particularly cocaine.

A few years later, just after she turned 18, Phillips was arrested when she was found collapsed on quaaludes on a street in Los Angeles.

Phillips said on "The Oprah Winfrey Show" that her father's response was, "Congratulations! Now you're a real Phillips. Now you know that even though they caught you, the rules don't apply."

Her weight loss and erratic behavior disrupted the show's filming and became a source of distress to her co-stars, Bonnie Franklin and Valerie Bertinelli, according to People.com.

When she went to seek treatment at Fair Oaks, a psychiatric hospital in Summit, New Jersey, in December 1980, she joined her father and stepmother, who entered the hospital after being charged with conspiracy to distribute narcotics, according to People.com.

She left with a clean bill of health, but soon enough resumed using drugs even as she attempted to rebuild her career as a member of her father's new version of the Mamas & the Papas.

In her memoir, she recalls arriving at a hotel room to find two packages -- one containing her father's newly published memoir and another containing an eighth of an ounce of cocaine, according to excerpts of the book published on MSNBC.com.

After shooting up, she recalls reaching for the book and looking up her name in the index.

"Under my name was a list of subheadings and page numbers. I scanned down the entries:

attempts to clean out...

at finishing school in Switzerland...

"There it was, my life to date, with highlights selected, cross-referenced, and alphabetized. I had been organized and reduced to a list of sensational and mostly regrettable and/or humiliating anecdotes. Being indexed, particularly under such dubious headings, gave me a weird feeling that definitely wasn't pride. I felt like I wasn't a real person, just a list of incidents and accidents," she writes in the book.

Her television career experienced a revival in the 1990s, with guest appearances on hot shows including "Beverly Hills, 90210," "Melrose Place," "Walker, Texas Ranger" and "Chicago Hope," her profile on IMDB.com states.

From 1999 to 2001, she had a regular role in the Disney series, "So Weird," and several other television guest appearances followed, according to IMDB.com.

She appeared to be getting her life back on track, eventually giving birth to a son, Shane.

She was arrested in for drug possession in 2008 on her way to an "One Day at a Time" reunion. Since then, she says she has been drug-free, and hopes that purging herself of the secret incestuous relationship will help her recover.

Yet she insists she does not hate her father for what he did.