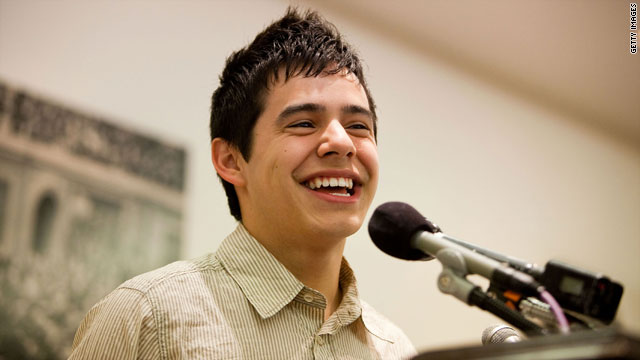 (CNN) -- Even though he has only one album under his belt, David Archuleta doesn't think it is at all too soon to release a collection of Christmas music.

"I feel like you have to take advantage of the opportunities that you are given at the time," said Archuleta, 18, the runner-up on season seven of "American Idol."

"I don't know how long I will be in the position with music that I am. ... I just felt like while people are enjoying what I am doing and recognizing the work I am doing, it probably is a good time to do it."

"Christmas from the Heart" features tunes that are near and dear to the teen, who said he loves the holidays because they allow him to get together with family and friends.

He recently spoke with CNN about his new album, branching out into songwriting and why he enjoys Christmas in Vegas.

CNN: This is only your second studio album, so why Christmas music?

David Archuleta: Christmas music is something I've always enjoyed. The holiday season is pretty much a favorite time of the year because of what it's all about and what it gets people thinking about.

That music, for me, is timeless and something people can always enjoy. I always sing during Christmastime, so why not do a Christmas album? It was a really great project for me to do because it is such a special time and season for me.

CNN: What does Christmas mean to you?

Archuleta: For me, it's about your memories with your family, that whole holiday season. It's such a happy and memorable time, so for me, it was all about the memories and remembering. And that's what I wanted to try and get across with the album.

It's mostly traditional songs, but there is one original song that I helped to write, called "Melodies of Christmas." It talks about how the melodies help to bring back the fun memories people have.

CNN: What sets your Christmas album apart from the multitudes that are already out there?

Archuleta: I tried to give the music a reverence. We could have gone more radio friendly because I am in the more pop vein of music, but I wanted to make sure when people listened to it I got them thinking about what the songs were talking about.

Whether it was through the vocals or the arrangement, I wanted people to connect with the songs emotionally.

CNN: Do you have a favorite Christmas song?

Archuleta: I don't really have a favorite, but I have always loved "O Holy Night." It's such a powerful one. There is also one on the album called "Pat-a-Pan" that I really like that's a more fun one that people aren't as familiar with. I sing the beginning in French, and I have never sung in French before.

CNN: What are you hoping to get in your stocking this Christmas?

Archuleta: I don't know. I have never been huge into presents. For me, the holiday has always been about spending time with my friends and family.

That quality time is so important to me, especially now, because I don't get to do it as much as I used to and I took it for granted so much when I was always around them. Now, it's such a special time when I am able to hang out with them and be around them.

Last year, we went to Las Vegas together [for Christmas] and we spent time together just watching movies and playing games and stuff. It was really nice.

CNN: Are you working on another album?

Archuleta: I am. It's been really busy, but it's been really great because I am happy to be able to do all of this. ... Right now, I am writing for the next pop album, and it is so much fun being able to be involved in the writing.

Being able to tell my story, and be more expressive with the music this time, means more of my personality will be in the music, not just the lyrics, but also the melody. People will be able to get where I am coming from with these songs.