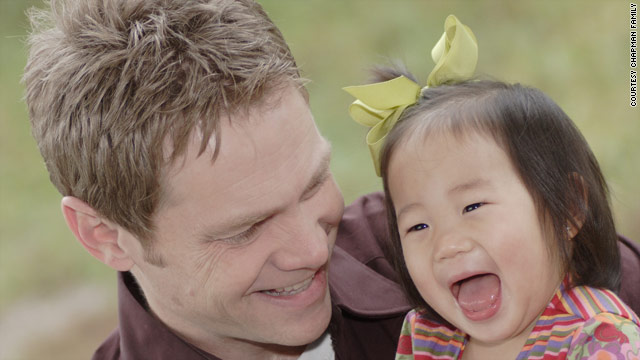 Steven Curtis Chapman sits with his daughter Maria. She died when accidentally struck in his family's driveway.
STORY HIGHLIGHTS

(CNN) -- He stood there at the hospital, not as a Christian music singer comforting a little child, but as a father praying for a miracle.

Steven Curtis Chapman held onto his wife that night 18 months ago and prayed for their 5-year-old Maria, their youngest adopted daughter, who had been accidentally struck in the family's driveway by one of her brothers returning home in his truck.

Chapman had tried CPR at his house. The paramedics had tried to revive her but she had been pronounced dead on arrival at the hospital.

Now he asked God's help to bring her back. Chapman's wife, Mary Beth, told him they had to accept her destiny.

"It was after a few minutes that my wife, with her hand on my shoulder, said, 'I really think we are supposed to let her go for now,' " the soft-spoken Chapman said recently by phone before a concert in North Carolina.

Chapman, who has been singing Christian music for more than 20 years, was now faced with a God he had not known before. Everything he thought about God was different, he said, and he began to wrestle with his beliefs.

His new album, his 19th, entitled "Beauty Will Rise," is his personal testament to Maria's life and the overwhelming belief that they will be together again one day.

Maria had been playing behind the family's home in Franklin, Tennessee, on May 21, 2008, when her brother Will came around the driveway in an SUV. While no one is sure exactly what happened, Maria, who wanted someone to lift her on the monkey bars, ran towards her brother's truck and was struck. An investigation called the tragedy an accident and no charges were filed.

In the days after Maria's death, the whole family -- Chapman, his wife, their two sons, their daughter and two other adopted daughters -- grieved together, went everywhere together, did everything together, even sleeping all in one room.

Chapman said he felt like he was in a black hole.

"I just felt myself being pulled down into this place of despair," he said.

Chapman and Maria had a special connection. He met her in her native China while she was an infant. He and his wife had already adopted two children from there, and weren't looking for another. But Maria "touched a special place in my heart," and he called his wife just to tell her about the baby girl.

"I can't put it into words, but I've picked up a lot of little orphan boys and girls over the years," he said. "I've never had anything happen to my heart like what happened when I held this little girl in my arms for a few minutes."

It was almost impossible to imagine her not bouncing through the house, not dancing along as he sung to her, he recalled. And it was equally as difficult to think about singing again after she died.

Her passing was an emotional earthquake and in the immediate aftermath Chapman doubted he would want to write and sing again. He cringed at the suggestion that he write songs about Maria. Her death was such a deeper level of sadness than he had felt before that he thought he would never be able to share that pain through music, he said.

But as the dust settled and life went back to its new normal, Chapman began to think about putting his fears and hopes into music. He still didn't plan on doing an album, but songwriting was helping him heal.

"Songs are really cathartic for me," he said, "because they force me to put my feelings and thoughts into a capsule and say, 'There it is.' "

The first song he wrote, "Just Have to Wait," was an example of the raw emotion Chapman hoped to share. Chapman said he wrote it sitting alone in the darkness, just aiming to share with his family the faith he has that each one of them will join her in heaven.

Songs are really cathartic for me. ... They force me to put my feelings and thoughts into a capsule and say, 'There it is.'
--Steven Curtis Chapman
RELATED TOPICS

He soon knew that these personal psalms needed to be recorded, but he didn't want a slick, produced sound. Instead of working with a slew of recording people, Chapman and co-producer Brent Milligan decided to work on the album while the singer was out on a tour. Just the two of them, a sounding board for the other.

They recorded in hotel rooms, dressing rooms, the side of a stage, wherever they could set up a laptop and a couple of microphones. Milligan said it was difficult at times because he had never noticed so many little noises in hotels before like the sounds from a nearby interstate. They would also squeeze in recording time in the hours between sound checks and the show, trying to find quiet moments to get things on the computer, he said.

It was genuine that way, Chapman said.

"It just felt like that's honest. This is life going on," Chapman said of the unorthodox recording method. "It's the day-to-day pain, just walking the journey."

Milligan said that he believes the music's meaning transcends the tragedy that inspired it.

"In recording these songs he knew they were going to bring hope to a lot of people," Milligan said. "And that is so much what he is about. These songs are timeless, people will always be hurting and these songs will always speak to them."

When asked what song he thought would be Maria's favorite, Chapman paused for a while. Then he thought of the title track, "Beauty Will Rise."

"She likes loud, she liked it fast," he said, the smile returning to his voice. "She likes the one with all the energy and the one she could bounce in the car to."