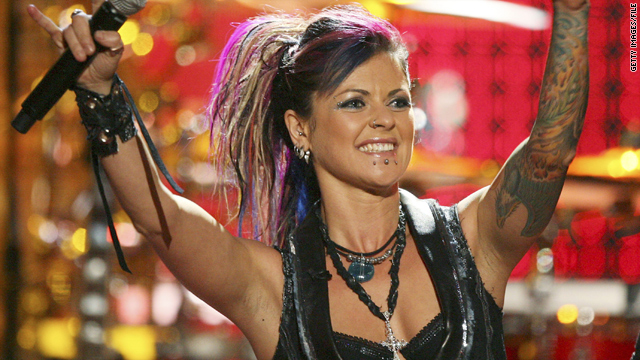 It's funny that rocker Dilana is not a fan of "American Idol."

The 37-year-old singer [who prefers to go by her first name] who herself participated on a musical competition reality show, admits that she has never liked Idol nor is she a fan of the song choices available to the contestants.

But she is nevertheless connected to the popular Fox show.

Last season's runner up Adam Lambert sang a version of "Ring of Fire" that many fans believe was based on Dilana's version of the Johnny Cash tune and Lambert's fellow contestant Allison Iraheta covers Dilana's song, "Holiday," on her new album.

"They are both amazingly talented," Dilana said of the "American Idol" pair. "And if [Iraheta] can sell a few million records, I'm not going to complain."

The South African native was runner-up on the show "Rock Star: Supernova," which sought to find a lead singer for that group.

Since then, Dilana said she's been focusing on her music. Her debut U.S. album "Inside Out," also contains a version of "Holiday" and features No Doubt drummer Adrian Young and Mötley Crüe guitarist Mick Mars.

She recently spoke with CNN about breaking into the business at her age, the new film she's starring in and what it felt like to receive standing ovations from Jane's Addiction member Dave Navarro and Mötley Crüe's Tommy Lee.

CNN: Tell us about the concept behind your album, "Inside Out."

Dilana: The concept was based upon the television show I was on three years ago. Right after getting off of the show, which was rock oriented, we talked of targeting a project towards the audience who was voting for me.

I also wanted to do some things that were experimental. My range of musical interests and tastes are pretty wide and diverse so I tried a little bit of everything on this album.

CNN: What made you want to try out for the reality television show "Rock Star: Supernova?"

Dilana: I had watched the first show, "Rock Star: INXS" the first season and I found myself getting very frustrated thinking "Man, I should be on this show."

I don't really watch television and it was the first reality show I had seen which seemed real to me. There wasn't a lot of drama and it seemed to me to really focus on the music.

CNN: You did well on that show. What was it like to have judges Dave Navarro and Tommy Lee give you a standing ovation?

Dilana: It was probably the craziest moment of my life and the most memorable. I just always considered myself a little girl from South Africa who liked to sing.

Just setting my feet in a city like Hollywood was already a little overwhelming and then to be able to stand before these guys, perform for them and have them stand up for me was just the most crazy thing that has every happened to me?

CNN: There are a lot of younger artists in your field. Does it feel strange to be finding success at this stage in your life?

Dilana: I used to get really mad and I always thought, "Why is the world cheating me? Why am I not getting noticed?" But I am actually extremely happy that I am now 37 and a lot of my success is happening now.

I feel that at my age I am so much stronger and wiser. I can handle disappointment a lot better now and I am so much more patient.

When I see these young stars having success I am very happy for them because it's a long, tough journey, but I am also afraid for them. It can be rough if you are not strong enough to handle it.

CNN: There was so much shock when you didn't win "Rock Star." Were you surprised?

Dilana: I was extremely nervous to win and extremely relieved not to win.

The first moment I heard [Supernova's] original music, I knew that it was not the right fit for me. I like to sing my own stuff, and songs that have meaning for me.

CNN: You are also acting these days in a film titled "Angel Camouflaged."

Dilana: Yes, it's an independent film directed by Michael Givens. I play the lead character, Scottie Ballantyne, and it's basically a rock 'n' roll drama.

It stars also James Brolin, Carlos Bernard from "24" and my brother in the movie is this amazing actor named Warrick Grier who they flew in from South Africa so we could have the same accent.

It's a really, really great cast and a very creative movie that is different from anything I have ever seen.

It is set in South Carolina and my character and her brother inherit a bar from my aunt who is played by Patty Smyth.

Dilana: Yes. It was going to be Joan Jett but because she's filming her own movie she couldn't work out the scheduling.