Griffin O'Neal: Dad cheated on Farrah, did drugs with Redmond 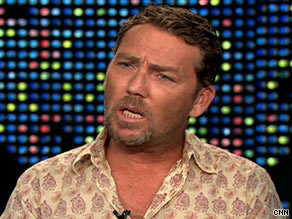 • His father attempted to shoot him and injured Griffin's wife and him with a fireplace poker.
• Ryan was habitually unfaithful to his partner Farrah Fawcett, who died of cancer June 25.
• Ryan partied with Griffin's half-brother, Redmond, and said his father was responsible for Redmond's drug problems.
• Ryan didn't recognize his own daughter, Tatum, at Farrah's funeral and asked her for a drink.

The following interview has been edited for clarity and brevity:

Griffin O'Neal: She was a great friend. Yes. I came from a not-so-nice kind of a world. We were a kind of a battling and kind of crazy family. And she was so nice, I didn't trust her. ... And the crazy, sad part was that she stayed nice all the way to the end. And it broke my heart when I was not allowed in to say good-bye to her.

King: Well, how old were you when Ryan and her got together?

King: Were you close with your biological mother [Joanna Moore]?

King: Were she and Farrah close?

O'Neal: They had met once. They had a lot in common, just because they were two lovely Southern belles.

King: You weren't allowed to attend the funeral at the cathedral. Why not?

King: Who didn't let you attend?

O'Neal: Ryan didn't want me in. I call him Ryan now. I've had to let go of him as being my dad, not that he was ever really a dad. But he said, no, no Griffin. Tatum, Patrick, even my daughter was allowed in. It's OK. I said my good-bye to Farrah the day that she died. [Tatum is Griffin's sister, and Patrick is Griffin's half-brother, the child of Ryan and Leigh Taylor-Young.]

King: You did speak to her?

O'Neal: No, no, no. I said my good-byes inside my heart and with the clouds and with the higher power that I believe in. No, I had not seen her since ... the day before my father tried to shoot me in the face.

King: He was mad at her having cancer?

O'Neal: Yes, because the attention was diverted to Farrah. He didn't like that.

King: Give us your description of the relationship between between your father and Farrah.

O'Neal: It was bombastic at times. There were great times. There was very hard times. By the time Red [Redmond O'Neal, Griffin's half-brother] was 5, they lived in separate rooms in a very large house.

King: Was he not faithful to her?

O'Neal: Faithless. He has no faith.

King: Was he faithful to her ... in the relationship?

King: He saw other women?

O'Neal: Are you kidding? She walked in on him and he was with some other woman.

King: Do you know this for a fact or is it hearsay?

O'Neal: No, sir, I know this for a fact. She told me. He forgot. He locked every lock in the house, except he forgot that she had a remote control for the garage, and there she is.

King: Why do you think she left her entire estate to Redmond and none to Ryan?

O'Neal: I don't think she was as unconscious as they thought she was. When you're dying of cancer, because I watched my mother die of cancer, you're in and out of a morphine haze. I think she saw the transparency between her, my father and Alana [Stewart]. And I think there's a little bit more to be said about that. We'll find out later.

King: Do you think they had a relationship?

O'Neal: Can't say they did. I know my father very well. He's a hard one to fend off.

O'Neal: I'm married to a beautiful woman. I have three kids actually. I have a 20-year-old daughter. I have a 15-year-old son and a 2-year-old.

O'Neal: We had a relationship through text messaging. I sent her messages of my son.

King: So that statement is false?

O'Neal: I don't even know who this person is. This person has no idea what they're talking about.

King: When was the last night you talk to your father?

O'Neal: The night he tried to shoot me in the face.

King: Tell me what happened. By the way, he was charged and the charges were dismissed.

He cried and held Jo-Jo, my wife, and held me ... and said, I didn't think anybody was going to stop me because my dad just let him do whatever he wanted to do, supplied him with cash for his drugs, supplied him with everything. It was a losing battle.

King: What happened that night? Why did he try to shoot you?

O'Neal: Because I said, dad, if you want to take care of this yourself, because I know you don't know what to do, I said, you're on your own. ... And then I started to tell him about how I felt, about how I felt about his fathering, about how I felt how he treated me when I was a child, and my sister and my mother.

King: This was how long ago?

O'Neal: This was that night. This was Farrah's birthday three years ago -- two years ago.

King: So what happened?

O'Neal: He went crazy. And then my girl goes, he's got a stick. I'm packing my stuff upstairs.

O'Neal: I don't know. She didn't know what it was either. All I know is I got stabbed in the side with a fireplace poker. Not the shovel and not the brush. It was the gnarly part of the poker.

King: And then he shot you?

O'Neal: No, no. Then I said -- and as he's swinging back -- he hits my girl in the face, crushing four bones in her cheeks, put nine stitches above her head. He glances at her. I grab the poker and I say, don't. Of course, all 237 pounds of him, he falls on my eight and a half month pregnant wife, right on her stomach. I grabbed the poker out of his hand and said don't move. I will bury this in your head. Don't move. My dad is a very, very, very violent man.

King: Did you call the police?

King: Why were the charges dropped then?

O'Neal: Well, because, honestly, I didn't know how she got the injury. She was behind you, dad. I didn't tell him this. All she says is I saw a poker hit me in the face.

King: Are you close with Redmond?

King: He's been arrested several times for drug possession, serving time now for probation violation, although he was allowed to attend the funeral. When did you last talk with him?

King: When does he get out?

O'Neal: I don't know. He has another case pending. I mean, he's going to do a county year. It's not a nice place.

King: He seemed very close with his mother?

King: Are Ryan and Redmond close?

O'Neal: Well, I think they are probably going to get a lot closer now, since Redmond has all the money. Who knows? Yes, they are close but for reasons that are ill. Ill reasons.

O'Neal: They party together. They were both arrested. My dad had more dope on him than Redmond did. This isn't the '70s anymore.

King: How is [Tatum] doing?

O'Neal: She's battling. It's been a battle for her, too. I guess people use substances to shut off the noise in their head. What ends up happening is the noises go away for a second, and then they come back completely amplified and then you are in a deeper hole than you were.

She is struggling to stay sober. I think she's OK now, but I have had to put some distance between us for a while, because I didn't think she was that healthy.

O'Neal: Everybody's had a lot of questions on what the heck happened to the O'Neal family.

O'Neal: Yes. And I don't want to hide anymore.

King: It's been reported that your father says he didn't recognize Tatum at the funeral, and when she embraced him, he asked, do you have a drink on you? Do you have a car? What do you think of that story?

O'Neal: He was flirting with everybody.

King: With his daughter?

O'Neal: My dad is getting up in the years now. I don't think he really recognizes people that he's known for years.

O'Neal: It was his daughter. He didn't realize it was her.

King: Something about you; in 1986, you were driving a speedboat when a horrible accident occurred, killed Francis Ford Coppola's son, John Carlo. You were acquitted of manslaughter, but convicted of negligent operation of a boat. The trial judge said you had a history of lying with little respect for others. Was that statement true in 1986?

O'Neal: Well, I never met the judge before, and I didn't know if I had a history of lying or not. But I probably did. That was one of the hardest times in my life. And I did lie. I said it wasn't me that was driving the boat. And I owned up to that. And I will live with that every day.

King: This whole life has been incredible for you. You must look in the mirror and say --

King: You are also angry about Alana Stewart [Farrah's friend], too?

O'Neal: I don't trust her. She was selling Farrah's stuff on eBay the day Farrah died. Trust me, I know who she sells through on eBay. I am disgusted with those people. I thought they were exploiting her. I think that they will continue to exploit her through the "Farrah Story II" and Alana's new book.

Caller to "Larry King Live": I want to ask Mr. Griffin if he is worried about any relationship that is left over with his dad, that if there will be a relationship.

O'Neal: I can honestly say my dad has not called me once. He has shown zero remorse for the 22 stitches he put in my wife's face. And he showed very little remorse for trying to shoot me in the face. I'm having a hard time thinking there is going to be some reconciliation.